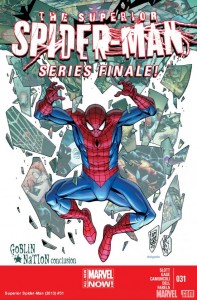 The epic conclusion to Goblin Nation, the Superior Spider-Man finale, and the return of Peter Parker are all packed into Superior Spider-Man #31. Peter now has control of his body and his mind and is off to make good on his promise to Otto and save the woman he loves Â while also stopping Green Goblin and saving New York. The main issue has Peter asking different people what has happened over the past several months and trying to piece together his life during that time to find the best strategy to defeat Goblin. He has a run in with Spider-Man 2099, The Avengers, Charlie, and calls Aunt May while trying to save the city. When he finally gets to Goblin, Peter puts a lot of trust in Anna Maria to save herself while he battled the Goblin, who ended up being Norman who had plastic surgery so the world would not recognize him. Peter battled him and eventually injected him with the cure causing Norman to not have to deal with the crazy alter ego while vowing his revenge. The second part of the issue deals with the aftermath of the whole situation with Charlie and MJ. There was some emotional conversations about Gwen and how people who know Peter are never safe. The two of them decide to leave him for good to get away from the madness.Â J. Jonah Jameson steps down as mayor and wants revenge at Spider-Man even after Peter gives him back the video that Otto had used as blackmail.

The issue was a very satisfying conclusion to the Superior Spider-Man story, but it just seemed like everyone accepted he was back with really no questions about what had happened over the past several month. The build up though 30 issues knowing that Peter was going to come back to a mess ended up being cleaned up rather nicely. Hopefully The Avengers question him more and try to dig into what was going on with Spider-Man. The art in the issue was excellent and seemed to have a more colorful vibe then previous issue. The detail was very pleasing especially in all of the action scenes.

Overall, Superior Spider-Man was a very fun series that at first was frustrating, but I had grown to love and will be sad to see go. The finale was fitting up just seemed to wrap everything up a little too nicely. Where they take the new Amazing Spider-Man series will be interesting and hopefully can build off the fresh vibe that Superior Spider-Man provided.

Thoughts? Let me know in to comments below or on Twitter @joshraj9