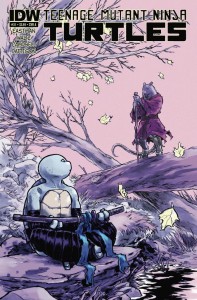 TMNT #31 slows the pace down and really helps move the story forward. Donnie and Casey finish fixing up the motorcycle and have an amusing conversation about statistics in baseball. Raph and Alopex continue to bond after Raph finally trusts that she isn’t still with the Foot. Also, Splinter finally talks to his oldest son Leo, who is still lost after being brainwashed by Shredder. Splinter tells Leo that he went though a similar feeling of fear before Leo was born, but his mother helped him stay his course. Later that night the turtles are talking with Splinter, minus Leo, and are attacked by a mutant bird and several foot members. As the fight looks out of reach, Leo arrives to save his family, wearing his signature blue mask again.

This issue saved the action for the last couple pages, but the various dialogue moments though out the issue were very enjoyable and helped move the story forward. The art continues to have the dark vibe to go along with the darker story, the only issue is the legs on all of the turtles look odd and seem to big compared to the rest of the body.

Overall, TMNT #31 continues in quality and sets the bar higher each month. The story with Leo being a dark ninja may not be completely over, but it was nice to finally see him back in blue and helping his family. Who called for the attack on the turtles and where they will go next are the big question marks at the end of the issue. 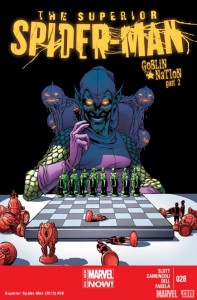 Superior Spider-Man #28 is part two of the Goblin Nation. Spider Island is being attacked and Spider-Man has to give up and escape to the only other safe place he know, Peter Parker’s new company. Inside Superior Spider-Man’s mind Peter is still wandering around in Otto’s history which is very much like Peter’s was, but Peter had a loving family. Peter tries to keep things straight but ends up forgetting who he really is. MJ is attacked by the goblins and realizes she can be a wildcard in this war, she begins gathering everyone close to Peter, and tries to get them out of the city. Meanwhile, Spider-Man is fighting off a goblin, realizing that they all know that he is actually Otto. Charlie ends up being the goblin that is attacking Spider-Man, she is in and out of her goblin state. She tells him that she needs his help to stop this war.

The surprising twist regarding the real Peter Parker was the highlight of this issue. The Goblins may have New York over run, but Peter not knowing who he truly is anymore puts him in a tough situation. The art in this issue really stood out, in both Peter’s mind as well as the action sequences in New York. 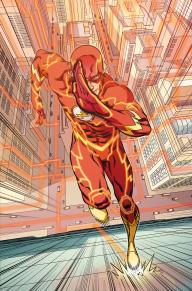 The Flash #28 begins with Barry seeing fragments, knowing that someone is attacking him but he has no control of his body. Deadman has possessed Barry because there is a killer that wants to kill the heirs of Keystone City. This killer is possessed by another ghost who died in a mine on top of where the city is now rests. Deadman tells Barry that he was able to access all of his thoughts when he possessed him and Barry realizes that the killer knows about DNA evidence and is going to use it to determine who the heirs to the city are. When Barry arrives to his lab he finds his coworkers dead.

The Flash is in desperate need of a new creative team. The stories have been suffering to keep readers attention and I find myself forgetting what happens month to month. The only reason I keep buying this book is for the art. The panel layouts, the bight colors, and look of The Flash make the book stunning to look at.

Overall, The Flash #28 had another throw away story in my mind. With a new creative team in the new future hopefully we will see the quality of this book increase, while also keeping the art at a high level.

What did you pick up this week? What was your favorite comic? Let me know on Twitter: @joshraj9