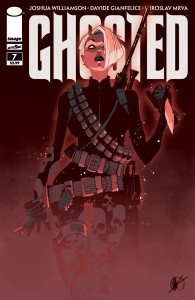 Ghosted #7 continues the second story arc in the series with Jackson trying to find a girl who was kidnapped by traffickers who specialize in possessed women. Jackson and his team are meeting up with someone who deals with the black market and asking him how to get in touch with the Brotherhood. Jackson still continues to see visions of Anderson after his near death experience. Suddenly the Brotherhood arrives and kills members of the group as Jackson chases after them. He catches up to two other members and realizes he is out numbered, and going to die. Anderson’s ghost appears and kills them, she tells Jackson that when he dies she wants it to be brutal. The team eventually finds a map to the liar and they go where it is located at an Aztec temple that is haunted. When they arrive, Jackson finds the woman he is looking for but the ghost has taken over and won’t let her leave.

Ghosted #7 takes the second arc to a new level. The art continues to express the dark and gritty feel that the characters are experiencing, with the exception of the flash back to a bight, “happier” time. Anderson’s ghost was terrifying and brutal for what occurred at that moment. The way she was incorporated into that scene worked perfectly to move the plot forward. Seeing the team going back to another haunted “house” should add a whole new element to the danger, with the Brotherhood lurking around every corner.

Overall, Ghosted #7 has plenty of shocking moments. Jackson seems to be stuck with no way out and Anderson said she will not save him. Is there another ghost who will save Jackson or will he enter the spirit world which was promised to be full of pain for him. 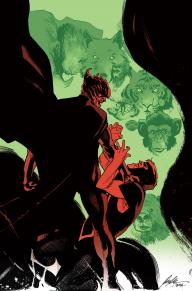 Animal Man #28 continues the emotional events of the previous issue. Buddy is trying to fight off a foe, whileÂ Shepherd is dying and Blood has his grasp on Maxine. Blood must have Maxine renounce the Red and consume her in order to gain the power necessary to claim the Red as his own. Maxine uses her powers in a tough way calling herself “Animal Girl” and rushes back to Shepherd. Shepherd had just used the last of his powers to send a message to Buddy on where to find them. As Shepherd is dying, Maxine transfers her powers to him, thus allowing Shepherd to heal. Blood comes back and pulls Maxine’s mother into the Red. Blood is going to kill her unless Maxine gives him the remainder of her powers. Suddenly, Buddy arrives, kills Blood, and saves his family. Buddy promises that he won’t leave them again, as he says this someone is looking down on him remembering his promise.

Jeff Lemire really knows how to get his readers emotionally invested in his characters. Animal Man is no different. Seeing this man putting everything on the line for his family really defines what a hero he is, despite his flaws. Lemire has used this emotions to his advantage during his run on Animal Man, and again it happens in this issue. There is a perfect balance of emotions, violence, and excitement in this issue.

Overall, Animal Man will be leaving on a high level next month regardless of where Buddy ends up. He proved he is the hero his family needed during this issue. Hopefully, Buddy can get the ending that every hero deserves. 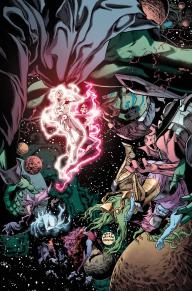 Green Lantern: New Guardians #28 continues with Kyle helping the new guardians with various tasks around the universe. This issue starts off on a world where the inhabitants are worshiping a god. Suddenly a warrior comes and kills this god and tells them that the god takes and does not give anything back. Meanwhile, Kyle notices that one of the guardians has left and they are now down to 6 of them as they approach a world that is split by war because of the light and the fire religion. After taking matter into their own hands Kyle is able to calm everyone down but not before damage is done. Suddenly, the god appears and fixes the broken buildings and the damage. Finally, we see the warrior on a different planet who is informed that the destroy of worlds has been found and to assemble all of the god killers to begin their attack.

This issue feels like the last several New Guardian issues, there is a problem on a planet, Kyle arrives uses a different color light and saves the day. The more interesting parts were the parts not involving Kyle. The god killers could be very interesting hopefully they become more ally then foe. Also there needs to be more focus on the guardians, having one leave could set up for an interesting story going forward.

Overall, Green Lantern: New Guardians #28 sets up for a new story which hopefully can bring something new to the table and stop dealing with the same type of stories we have seen the last several months. More background on the new guardians and what their overall motive would be nice as well.