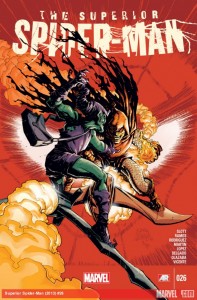 After the action packed issue #25 Dan Slott keeps the intense moments going with issue #26. There is a battle between the original Green Goblin and the (original?) Hobgoblin. While this is occurring The Avengers begin questioning Superior Spider-Man. The reader also sees Peter in “Ock’s” mind, it is a very empty space because Ock has stripped Peter of his memories except for the important ones. Peter then uses these important moments that defined him as the fuel to help him going forward. The Avengers want to look at Spider-Man’s mind but he tells them he quits and jumps out of the tower.

Finally, the Goblins battle and we find out some interesting tidbits about the end game with this war. The moments when Peter showed up were great after missing him for almost 20 issues. Having him feed off the only remaining memories was a great way to show how he is going to get stronger. There were several areas where the art seemed to lack compared to other issues. The hard thing is this being a bimonthly book so having one artist is almost impossible.

Overall, Superior Spider-Man keeps the intensity up again after the events of the last issue. Having Peter back is a nice plus and should really move the plot forward going until Amazing Spider-Man comes back. 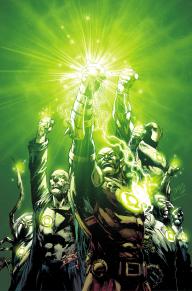 The battle begins with the Green Lantern Corps. John and the other corps members battle and are captured because of the Relic tech used against them. Hal gathers his allies and is pissed that he was “cloned” and is ready to fight anyone who is against the corps. Also the Durlan shape-shifters seem to have a bigger plan then was originally let on, they are also trying recruit the escaped convicts of the Green Lanterns. After John is captured he finds help from some unlikely allies and later convinces Hal to accept these allies in the upcoming war against the corps.

This issue was not a true Green Lantern Corps issue because it focussed on several different parts of the corps. Hal had a lot more involvement then he normally would. The difficult part about this issue is there is a lot of time jumping, which can be very confusing. There are times when events are current, 12 hours ago, or even 20 years ago and keeping this straight is not easy. The art at times can be very exciting, but when the closes up on Hal the art doesn’t seem up to par.

Overall, Green Lantern Corps Annual 2 pulls all the pieces together and connects the events of Green Lantern with Green Lantern Corps. The Corps are in dire need to forces and the fact that they need to become allies with unlikely sources should make for an interesting story going forward. The Green Lanterns may trust someone today but can the trust them tomorrow? 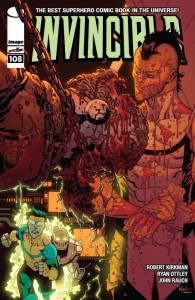 This issue was full of blood, death, and betrayal which is captured very accurately with the art. The art was very intense especially the final page, leaving the reader shocked with what is going to come next. The story really set up for the reader wondering if they could trust this alternate dimension Invincible but he ended up not being the one to fear. Invincible found himself in a very tough situation and how he will get out of it and back to his family remains to be seen.

Overall, this was the first issue of Invincible I have every read. With some quick Wikipedia research any reader could jump in at this point. I am sure the shock was greater for long time fans rather than someone like myself. A few of the panel layouts were cluttered, but the dialogue during those moments made them bearable.