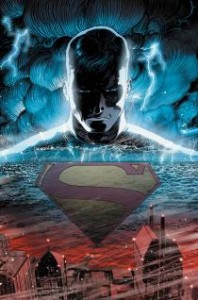 Action Comics enters the Zero Year, I really enjoy that the universe is calling this the Zero Year and the emergence of capes in our world. This issue brings back the jeans and tee “Superman” who is very cocky and does have a full understanding of his powers. He wrestles up some “bad guys” and actually makes one cry, but he gets a laugh out of it. There is a hurricane headed Â toward Gotham and Clark tries to stop it. Seeing him struggle by not having all of his powers, and actually taking some big risks made it quite interesting. While out there he has to save a few ships, there is a passenger on board from his past that he is unaware that he saved. He might not have stopped the storm but he did save those ships.

It is a bit odd that this is considered a Zero Year tie in. It happened during the same time period as Zero Year, but the lack of Bruce Wayne or Batman made it seem like this story could have occurred at any time. This doesn’t take away from how fun the issue was. Seeing the inexperienced Clark always adds an element of uncertainty to the story, and the art looked excellent.

Overall, if there was a panel that had Batman in it would have made it tie more to Zero Year. They did not have to necessarily meet, but could have been in the same area at the same time. That would have given this more of a tie to the story and allowed for a real Zero Year feel. 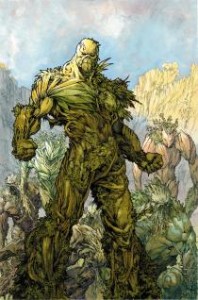 Swamp Thing #25 finally brings the battle between Alec and the Seeder as to who will be the avatar of the Green going forward. Alec is told that he doesn’t really need to defeat him just prove that he is stronger and the worthy candidate, also he can’t leave the arena or he will also lose. The battle begins and Alec uses some of his new powers such as making multiple versions of himself, while Seeder poisons the plant life in the area. This causes Alec to not be able to make more of himself. Seeder his him with a seed and Alec loses his powers and is sent to the mood without anything alive in the arena to come back to he appears defeated. He does make it back to the planet life growing on Seeders face and has him beat. The Parliament of Trees tells Alec to kill seed and be their Avatar. He remembers being told not to do anything that will change who he really is and doesn’t kill seeder. This makes Seeder the winner and Alec “dies” and is allowed to live in the Green forever.

This was the final show down we were waiting for and it didn’t disappoint. There were a lot of elements from the Annual issue and Alec’s training that showed up in here which was nice. The art is impressive and detailed as always and looked awesome in the battle scenes. The end of this issue could change this universe for a while.

Overall, this was a fitting “end” to the Alec vs Seeder story. Hopefully Swamp Thing will focus on the Seeder for a couple of issues before bringing the return of Alec. It would be nice to see how seeder does things and messes up and how Alec must comeback and defeat him and fix the mess he brought on the Green. 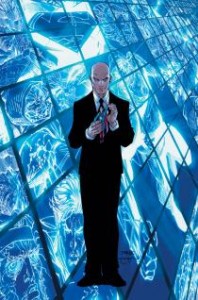 Superman Unchained #4 continues with Superman and Wrath battling Ascension and there are plenty of battle scenes that show Superman is no match for the Ascension drones alone. The real bulk of the issue actually occurs when Superman is not on the page. There is Lois who is recovering from the plane crash trying to find a way to survive and is told she needs to take the crystal and keep it hidden because it is very powerful. She also finds out in the end who is really behind everything but does not manage to escape just yet. Finally the story with Jimmy and Lex is the most intriguing and the reveal that Jimmy is involved in something is the most interesting.

Snyder really knows how to make Lex really Lex. He really seems like a big threat here and Lex doesn’t really do anything but talk, but what he says really sends a message that he is powerful. What hurt this issue is Villains Month really breaking up the story as well as not knowing anything about Wrath. The best parts of the story occurred away from Superman, but the best art was when he was on the page. The battle scenes really looked beautiful and showed just what Superman was up against.

Overall, Superman Unchained has a lot of things going on, but really keep the reader on the edge of their seat. This story is very interesting and has a lot of questions left to be answered. Snyder really does a good job with Lex and making him into a different kind of threat that could pose problems for Superman going forward.

What did you think of these issues, or any of the books this week? Let me know below in the comments or on Twitter (@joshraj9)