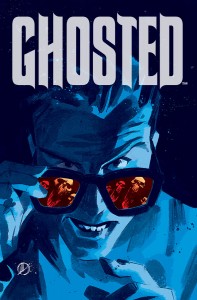 Ghosted begins a new story arc leaving exactly where the last issue left off, it actually has several repeated pages from the last issue. Jackson thought he was going to live out the rest of his life in style on the island. Six months go by until someone notices him and contacts someone. Jackson kills this man, but not before his boss is notified. Shortly after Jackson is attacked and shot several times and actually has a near death experience where he is back in the mansion and sees Anderson who tells him that when he is dead he will be tormented by all the souls he has wronged mainly her. When Jackson is brought back to life he is in Vegas and the person who kidnapped him is the owner of the casino he had robbed several years ago. The owner tells him that her daughter has been kidnapped by people who specialize is trafficking possessed people, if Jackson can bring her back then their differences will be settled.

After the fifth issue ended I wasn’t sure where the series could go. The creative team did a great job tying back to the original story, the near death experience was shocking and very unique how it left you on the edge of your seat. They made this issue very accessible to new readers who might be confused at first but could make sense after a few pages of conversation. The art didn’t really seem right on the island scenes, but once Jackson was in the mansion and the darker scene the art really stood out.

Overall, Ghosted #6 was a great transition into the new storyline and had some truly chilling moments. Hopefully, we can see new characters added to the group, which was something that made the first story so entertaining. The near death experience will hopefully play a toll on Jackson and we get some more moments where he goes back to the mansion again. 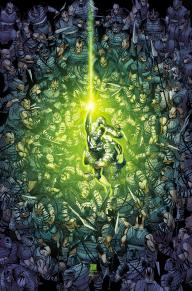 Green Lantern Corps #27 focuses on John and several other Lanterns trying to round up the escaped convicts after Oa was destroyed. When they are looking for clues, they discover some technology from Relic that drained their rings in the rubble where a Lantern went missing. Suddenly their rings go off and it is a message from Hal telling them and all of the universe that the Green Lantern Corps are the universes worst enemy (If you read the main Green Lantern title you will know the real story behind this message). John and Lanterns decide to go off and save nearby Lanterns who were attacked, here they learn of a bigger war brewing against the Green Lantern Corps.

The great thing about the Green Lantern universe currently is that each book can be read on its own, or if you want to see the bigger picture and how things tie together you can read them all. This issue really did not reveal anything that wasn’t already assumed by reading the other Green Lantern titles, but it did set things in motion for what should be an interesting annual issue in a couple of weeks.

Overall, Green Lantern Corps #27 seemed to set up what is going to be an action packed annual issue. The new characters that were fighting along side John were interesting and hopefully we see more of them and learn about their history. 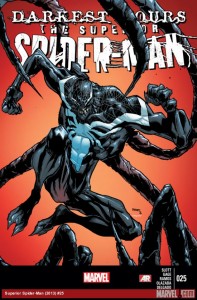 Superior Spider-Man is an action packed oversized issue that keeps up the intensity from start to finish. After stealing theÂ Venom Symbiote for himself, Ock is on a rampage though New York and the Avengers arrive. The Avengers seem to be no match for Superior Venom, Iron Man decides to go find Flash to determine how to stop Venom. Iron Man must give Flash his suit, while Tony Stark distracts Ock, Flash attacks and starts calling the Symbiote back to him. Suddenly Peter emerges and pushes the Symbiote off of Ock. Ock no longer Superior Venom tells the Avengers that the Symbiote has been in him for months and that is why he has been weird. The Avengers do not trust Spider-Man and know he must be brought in. While all of this is going on, a new female Goblin is created and a Goblin War is declared.

Superior Spider-Man #25 delivered on all levels. The story has been building to this point for so long, the big Peter reveal really shocked and took the story to another level. So much happened with Spider-Man and the Avengers that the big Goblin story seemed to get pushed to the side, which is a bit disappointing.Â Ramus did an excellent job with all of the action scenes, which added another layer to the story and the battle.

What did you think of these books or have a review request? Let me know in the comments or on Twitter @joshraj9