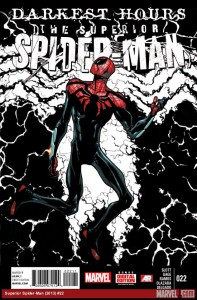 Superior Spider-Man #22 continues showing how this version of Spider-Man is better at catching bad guys but at the same time goes about everything the way a hero should not. Flash Tompson is back and has control this time as Agent Venom, which of course Spider-Man does not know and leads to trouble later in the issue. “Peter” has opened his company and hired employees while giving Aunt May a tour of his company he is called to the trainyard to deal with Agent Venom. Spider-Man deals with him never allowing Flash to explain himself.

This issue digs a bit more into finding out that Spider-Man is really Ock but never really allows it to fully develop. Also the Goblin has been hiding in the background for so long now and building anticipation for him that I fear the story won’t live up to what has been going on. The art was okay, it felt a bit rushed and Agent Venom looked a bit odd.

Overall, this story seemed like filler but it still moves the story forward even if it is at a very slow pace. The story has been dancing around some of these issues for so long it needs to be resolved at some point soon, or at least have a bigger role for a couple of issues. 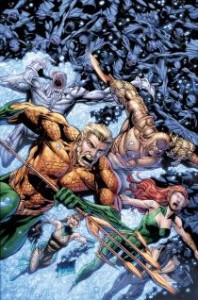 Aquaman #25 concludes the death of king storyline, but the end leaves the beginning of the next Justice League crossover event. The issue deals with Aquaman realizing that he must do whatever is necessary to save Atlantis from Atlan (The Dead King). Aquaman realizes that he must use the Trench to help him reclaim the throne, it is a risk but Aquaman knows his true calling is to bring peace between the surface and Atlantis. A battle begins and Aquaman emerges as the victor and takes his spot on the throne. The ending to this is quiet beautiful.

Geoff Johns has made Aquaman revelant again, it is just ashame that non comic book readers won’t see what an entertaining story this is (This should be the Aquaman solo movie). The ending with the cross over story will be very exciting and really digs deeper into the world Johns has created. The art during the battle was beautiful as well as the final panels with no dialogue.

Overall, this was an excellent ending to a great story. It wrapped up nicely while still leaving open more intense stories to come. With an exciting story and beautiful art it is hard to argue that this is not the best Aquaman issue in the new 52. 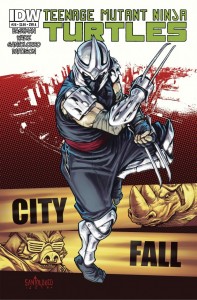 TMNT #28Â ends the City Fall story with Leo still brainwashed and his brothers areÂ trying to rescue him from Shredder. That is until Karai arrives with Bebop & Rocksteady andÂ things start to getÂ crazy. The turtles are fighting their way toward Leo. Bebop & Rocksteady are making this task difficult for them. Outside Casey goes face to face with his father and ends up walking away the bigger man. Spliter vs Shredder part two begins and Shredder has the upper hand. While, Donnie and Mikey deal with Bebop & Rocksteady, Ralph confronts Leo and decides to talk him out of the brainwash instead of fighting him. When it looks like Splinter has lost Alopex comes to save the day and the turtles escape with their master, finally a family again, but are there some trust issues?

This was an excellent story in regards to Leo being the dark ninja. The end revealing that Shredder had other plans was a great twist, as well as Leo not being 100% yet. Hopefully the story deals more with what Leo expreienced going forward and what role their mother has to play in their lives. The art again was great, Rocksteady and Bebop really shined with some great dialogue as well as being a big threat.

Overall, City Fall was a great story and it ended at the perfect time. Each story has dug deeper into the world and continues to have characters from early issues play a role in the story. The way Leo was saved seemed a bit to perfect, hopefully he strugges with what happened to him for sometime and really distrusts his family to add a layer of conflict going forward.