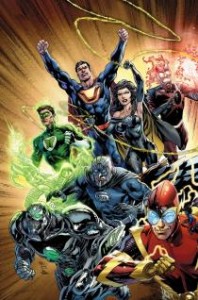 Justice League #24 is a Forever Evil tie in and really deals with the origin of Ultraman on Earth 3. It shows how his parents killed to get him to a ship and send him to Earth. Along the way his father filled his head with how he must rule earth and be strong while getting rid of the weak. Also telling him to avoid the sun (which makes him weak) and eat Kryptonite (which will make him strong). Ultraman crashes to earth and tells a dysfunctional Jonathon and Martha Kent to be his parents only to kill them 7 years later. He then goes into how he rose to power. Meanwhile back on our planet he confronts Jimmy is shocked that he doesn’t stand up for himself and puts others safety before his own. As he is about to kill him Black Adam comes in and attack Ultraman.

This is a great issue that allows the reader to dig deeper into the history of Ultraman. By Showing that he and Superman have a very similar start to their life, but their upbringing being vastly different, allows the reader to understand how different they characters truly are. Superman was raised with love and shows compassion to the world, while Ultraman was raised in lust and power showing why he is evil. Geoff Johns does a great job at expressing the emotions that drive Ultraman to where he is today. The art and battle scenes are beautifully drawn and the attention to detail really takes the story to another level.

Overall, Justice League #24 is the origin of Ultraman. We get to see where the evil was born. With him being one bad seed he was able to make the other “heroes” on his world evil as well. Seeing Black Adam come in and attack Ultraman is going to put in interesting twist on the story going forward. 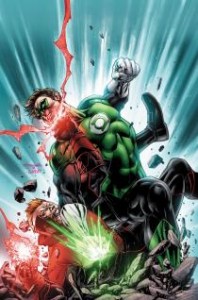 This issue takes place where issue #23 left off and continues the Lights Out Story. Guy decides to call the Red Lanterns together and inform them that he has been working as a spy for the Green Lanterns. Just as Guy says this Hal and the corps bust in and really make Guy look bad. Guy tells Hal that he is done being Green and has chosen the Red as his corps. Hal tells Guy that they need the Red Lanterns to save the universe against Relic, Guy tells him that they will under one condition. Meanwhile, Atrocitus still is battling the Red Entity inside him when Kyle arrives with the new guardians and calls the entity to him. Finally, we see Kyle confront Relic and tell him he wants to help Relic and not kill him.

This issue puts an interesting spin on what will happen between the Red/Green Lanterns after the Lights Out Story. The creative team is really flipping the whole universe on its head. The art works, but isn’t anything to go crazy for. This is a story about moving more of the pieces in place for what is to come. Also the reveal at Kyle’s plans and the amount of power he possesses should be interesting going forward.

Overall, Red Lanterns #24 was an issue which could change some vital pieces is the Lantern Universe going forward. Seeing Guy really accept the Red Lanterns is tough but he is also the perfect guy for the role. The pieces to the story seem to be set; it is going to be fun to see what happens next. 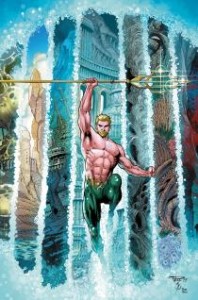 Aquaman #24 continues the Dead King story line and shows Aquaman awake after being knocked out for several months. He is in Antarctica and is told he has to learn the story of Atlantis and of the 7 dead kings. He goes down into a hole to discover a throne room of the dead kings with the promise that all of his questions will be answered. Aquaman is not very trusting but decides to sit upon the throne, when he does he is overtaken by ice and the real story of the issue begins. It tells the tale of the downfall of Atlantis and how there were really two “kings” of Atlantis. Aquaman learns that Atlantis was broken into 4 sections when it fell into the ocean, 3 of those sections survived one of them being from the trench. Finally, as he gets up from the throne Aquaman learns his true heritage, which is going to cause some big problems.

Geoff Johns has done a great job really making Aquaman a relevant character. Many people who make fun of Aquaman should really begin reading quality story after quality story that has being this series since the new 52. The art again continues to be some of the best in the new 52 which some beautiful page layouts. This story gave the reader back story, as well as set up for next month’s oversize issue where the Dead King story comes to a close. This issue really sets up for some interesting dynamic with Aquaman and Atlantis going forward.

Overall, Aquaman #24 allows Geoff Johns to set the foundation in place for what is going to be a thrilling end to the Dead Kings story, while also allowing him to recreate the history of this character to fit the world he is creating. Aquaman has become a character that is worth reading thanks to Johns.