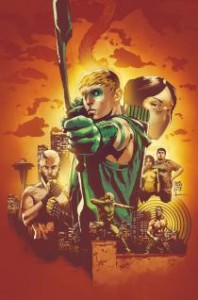 If you picked up Green Arrow when the new 52 began and didn’t like it, I highly suggest giving it a new try because since Lemire took over in issue 17 this has been one of the best books in DC month after month. The great thing about this issue is that it really is a good jumping on point because Lemire has a recap page, which the art looks awesome one.

The art and panel layout is this issue really makes it so much better and gives the book an edge compared to anything out there right now. The beginning of the issue focusing on Ollie trying to get his aim down after his ear drum was busted was great because that really does effect the balance in your brain. Seeing Count Vertigo as the villain was exciting, hopefully he will have a role going forward.

Overall, this issue was one of the best so far in Lemire’s run, and quality like this should be expected going forward. The end of the book is awesome with a certain character showing up at the perfect time. Next month is a Zero Year tie in so it should be interesting to see how that is handled. 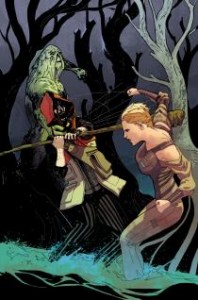 Soule really has handled Swamp Thing well since Snyder left, which at the time seemed like a tough task but he has made the series his own and it works very well for the character. The story of the seeder continues from before villains month and while there was a lot that happened this issue with the seeder and Swamp Thing it felt a little lacking.

The revel of the seeder was not the shock it could have been, but it works nonetheless. It was very interesting digging into the history of the seeder a bit and how he got his powers. This might make the story more interesting going forward to see what happens with him and Swamp Thing given there relationship. There could have been a mention of the whiskey tree, which there wasn’t and that was a little disappointing.

Overall, the seeder is going to be a very interesting character going forward given the past relationship he has with Alec. The battle between them could be very interesting given the events in this issue. Here is to hoping another story happens, allowing Swamp Thing to get his skills mastered, before they revisit the seeder for their battle. 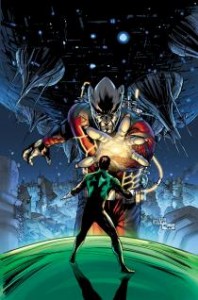 This is how crossovers should happen. As readers getting several books involved and having it all happen in one month will make the story memorable and fresh, which is what the Green Lantern Universe is doing. This story will be very big for the current team. This story will have big impacts on the universe, which could help put Geoff Johns separate from the current team, which will be needed.

This issue starts the Lights Out story, and so far this story has been lights out. What a great way to start the story, with plenty of action and leaving a shocking moment at the end that could change the corps forever. Seeing Hal more in the issue and being the leader he is supposed to be was very rewarding.

Overall, this story has some interesting potential, which has started off strong. The art is Green Lantern worthy with a ton of colors making the story that much more. Whenever we get the “core” lanterns together to fight battle it is always rewarding to the reader and this is just another example of that.