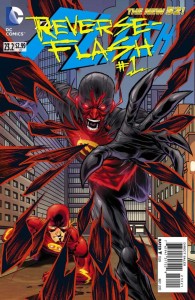 Daddy issues defeat Fastest Man Alive. DC Comics unleashes Reverse Flash’s origin! This book does something different than the other villains books: it picks up right where the previous left off and actually continues the story. When we last left The Flash, he had his speed force drained by Reverse Flash and looked like an old man. Reverse Flash needed it to travel back in time and we see why. Francis Manapul and Brian Buccellato rocked this character and found a creative way to continue their story despite the break.

Daniel West is an angry man. As this book shows, he has plenty of reason to be. His abusive father ruined his life. On some level, there are a lot of readers who can probably relate with difficult parents. While this isn’t completely imaginative, it’s executed well. Manapul and Buccellato presented a solid reason for why he is so angry and wants to travel back in time, at all cost. He doesn’t want world domination or destruction; just a happy life.

Scott Hepburn took over art for this issue and he did a good job. It’s a bit odd to not see Manapul’s art in a Flash book, but this was a suitable change. Hepburn’s art looks similar to that of Manapul, but it’s different enough to be appreciated on its own. For me, if an artist can pull off he intricacies of emotion on a character’s face, then he/she is an excellent artist. Hepburn nailed it.

Now that we know who Reverse Flash is and his origin story, it’s time to see this gets wrapped up. Obviously, The Flash will get his speed force back…or will he? Since the two are exiting the book after the conclusion of this story, I am wondering if they will shake things up. We saw a shakeup in Aquaman, Justice League of America and Justice League so I am going to brace myself for whatever Manapul and Buccellato have in store. So far, it’s been quite a ride. 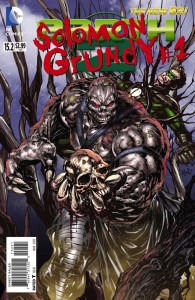 Where the River Ran Red

Born on a Monday….Solomon Grundy returns to Earth 2! After being exiled to the moon by Green Lantern, Solomon Grundy finds a way to return and wreak havoc once again. Matt Kindt delivers the origin story of a beast of a character, but we may never know if this is the origin James Robinson had in mind.

This book easily has the best cover out of all this week’s villains books. It’s much more impressive when you see it in person. Kindt should be commended for an admirable job writing an origin story for this character. It was what I expected; tragic. I found the present day story more interesting because this is such a great character. He’s strong and unstoppable. Green Lantern had to put him on the moon to keep him from destroying the Earth. Now that he’s back, it’ll be interesting to see if he shows up again in Earth 2 when Tom Taylor takes over.

While the creators did an admirable job with this book, it just didn’t feel like Earth 2 to me. The scenes at the slaughterhouse should have been darker and more terrifying. The scene didn’t trigger any emotion in me. Also, James Robinson didn’t write this book and we may never know if this was the origin story he originally planned for the character. I’m doubtful because it seemed a bit too obvious. Certainly didn’t feel like Robinson.

Regardless, this was an enjoyable book. Solomon Grundy was an excellent choice for an Earth 2 villain book. As I said before, I am curious to see if this character returns to Earth 2 when Taylor takes over. I have to assume he is because he’s back and Taylor can’t just ignore him. Grundy can literally draw the life out of the planet. We’ll be seeing him again. 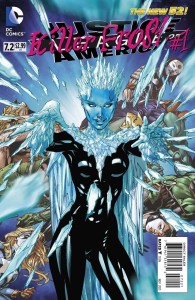 Killer Frost has one hell of a cold snap. While working on a new form of energy in the Arctic, Dr. Caitlin Snow is betrayed by her fellow scientist. An attempt to kill her changes her into Killer Frost. Sterling Gates delivered an excellent book that does double duty portraying Killer Frost as a smart woman and deadly adversary.

Right off the bat, Gates shows you how brilliant of a scientist Caitlin Snow is. She completes her predecessor’s work on the new energy project by herself. Even after becoming Killer Frost, she is able to strategize and learn from her battle mistakes. More importantly, Gates showed us what motivates the character. Just like many of the other villains books, she doesn’t want world domination or destruction. She is looking for a way to become human again. Killer Frost is quite a likable character for a villain.

Not much about this book that I didn’t like. Derlis Santacruz and Brett Smith did a great job with the art. Although I didn’t like the way Killer Frost’s head was drawn at times. She looked like an older woman.

Yet another excellent villains month book! Gates gets most of the credit for this book for writing Killer Frost as a highly intelligent, deadly, female villain. It’s great to see more brilliantly written female characters in the DC universe. This book was so good that I can now point to it as the reason why I will buy anything if Killer Frost is on the cover.