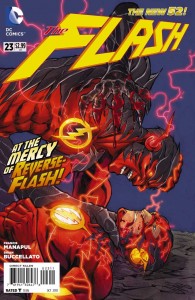 This long awaited showdown between The Flash and Reverse Flash will leave you speechless. After tracking the Speed Force killer to Dr. Elias’ lab, The Flash comes face-to-face with a twisted version of himself. As the two battle it out, Iris learns Reverse Flash’s true identity and the shock triggers something inside her. The Flash #23 presents a new twist on a well-known character and is still a delight to read.

There’s still an unusual amount of awkwardness between Patty and Iris. I feel as if I’ve missed something because I can’t recall where this is coming from. Much of the way Iris talks to Patty seems very forced. Like she is so uncomfortable that she doesn’t know what to say. It’s amusing to watch but I wish I knew where the discomfort was coming from. Still, it’s been odd that Iris hasn’t manifested Speed Force powers but this book shows us why. The Flash isn’t the one with a tie to Reverse Flash, it’s Iris. This was a surprising twist but it was effective. As was previously laid out, The Flash moves time forward every time he uses the Speed Force, so naturally Reverse Flash would do the opposite. Definitely lives up to the character’s name. I prefer this to the previous version.

Francis Manapul and Brian Buccellato knock this book out the park with every issue. They are some of the most consistent creators at DC. Their books are fun, creative and gorgeous. This book is no different. It’s obvious that the duo have become quite comfortable with the character. I always have a difficult time imagining a fight scene with The Flash but these two illustrate it so expertly. Consequently, the fight with Reverse Flash is wonderful because they can utilize everything they’ve learned from illustrating The Flash for the past year 2 years. Hopefully these two never leave this book because their style has become the standard for how The Flash should look.

Just like Justice League #23, this book did an excellent job leading into villains month. The twist at the end came naturally and readers are left wanting more while being satisfied with the way the story concluded. Manapul and Buccellato successfully brought Reverse Flash into the New 52 in a way that makes the character even more compelling than before. Be sure to pick up The Flash #23.2 next month for Reverse Flash’s origin! 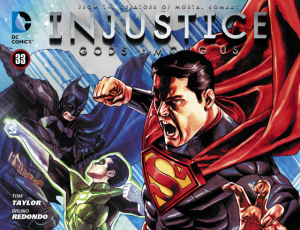 Injustice: Gods Among Us #33

Injustice continues with an all-out explosive battle between team Batman and team Superman. On a mission to steal Superman’s secret technology to make ordinary people into super humans, Batman and his team is surprised to find Clark Kent’s parents inside the fortress of Solitude. This changes everything when Superman returns and believes that they are after his parents. Now, a battle rages between The Atom and Superman as Batman and his team try to escape. However, Wonder Woman does something that has explosive consequences. Tom Taylor continues to surprise readers with this wonderfully imaginative tie-in to the video game.

Green Arrow gets a lot of shit for being arrow-shooting hero amidst the likes of Superman, The Flash and even Batman. But, as this book shows, there’s a lot more to Oliver Queen than just his arrows. Having stayed behind while Batman and the others escaped, he managed to salvage the mission and save the day. Superman never suspected what happened and that’s why Green Arrow is just as “super” as all the other heroes. In fact, with this portrayal of his character I would go so far as to say he was more of a hero than the rest. He ensured Batman and his team could continue to stand up to Superman; it cost him his life.

Taylor will soon be taking over one of my favorite books, Earth 2. So I’ve been trying to catch up with this series as quickly as possible. I am still a bit apprehensive but his work on Injustice is impressive. This book was particularly about Green Arrow and his sacrifice. Since these digital books are closer to half the length of a typical print book, it’s amazing what Taylor has been able to accomplish given such limitations. It’s for this reason that I’m warming to the writer. This is one of the many key books in this series that shows how talented he is.

I won’t even try to predict what’s going to happen next in this series. I assume it is heading to a point where it will meet up with where the game picks up, but I don’t know for sure. All I know, and all readers need to know is that this is a wonderful series. If you’re a fan of either the New 52 Universe or the video game, you need to be reading this. It’s only $.99 which is quite a steal for such an amazing story.