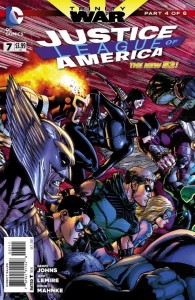 After the formation of three new Justice League teams, the investigations into Doctor Psycho and Pandora both end with more questions than answers. Meanwhile, Colonel Trevor’s team finally enter the House of Mystery. Lex Luthor turns down freedom and Amanda Waller is still trying to figure out what happened to her team.

Previously, Pandora stated there was another person who could open the box and we now find that person to be Lex Luthor. Since Superman was supposed to be the purest good heart, does this mean Pandora believes Lex Luthor to be the purest evil heart? It’d be interesting to hear her rationale behind choosing these two. Wonder Woman and her team reach the two before Lex can even touch the box. Naturally, this only makes Lex want the box even more; forcing Wonder Woman to grab it.

Seeing the Secret Society remain one step ahead of the Justice League has been exciting. Clearly, this is all building up to a big climax. They have been behind everything and have gone so far as to make the team believe Doctor Psycho, a mind controlling villain, made Superman kill Doctor Light. This seemed necessary in order to get them away from A.R.G.U.S. so that Plastique could turn Doctor Light into a bomb. It’s brilliant, but I’m sure it serves a different purpose than to eradicate the team. The Secret Society must know it will take more than explosives to kill them. Either there is something in A.R.G.U.S. they don’t want them to find or they’re just toying with them.

There were some great character moments in this book. The Atom finally confesses to the team about her spying and the true reason the Justice League of America was established. This may cause a rift between her and Element Woman, who seems to have become quite fond of her. For those wondering more about Martian Manhunter’s time with the Justice League, he reveals that he was the one who left the team. He wasn’t kicked out as was suspected. Hopefully we will see what really happened soon because this is one mystery that continues to baffle readers.

If you read my previous review of Justice League of America #6, you’ll know that I am not fond of Doug Mahnke’s art. It’s been unusual for me because while I didn’t like his art in that book, I had no issues with it in Green Lantern. In fact, I have been enjoying that book since the start. After reading this, I’ve discovered that my issues were with the way it was colored. Even though this book has most of the same colorists, it looks better. Colors are more vibrant, shadows are darker and everything is more detailed. This was a beautiful looking book from start to finish. My only complaint is with the way Mahnke draws eyes. They always creep me out. They tend to look wide and “lashy” in close ups; reminding me of moments in a Ren and Stimpy cartoon. But, I digress. The art team knocked it out the park.

If you love DC and aren’t already reading this event, you are missing out. All the big creators are involved and it is the best comic book event going on between all the publishers. Rather than going the traditional route and tying dozens of series into this event, it’s been contained. Geoff Johns and Jeff Lemire have a very specific story to tell and they have confined it to the main Justice League titles. The Phantom Stranger, Pandora and Constantine had a crossover issue last month, but they were all exceptionally good and felt organically linked to the event. Even at part 4 of 6, Johns and Lemire continue to excite and mystify. We know this ends in the “death” of the Justice League, but know nothing of what that actually means. The story continues in Justice League Dark #23, but I doubt we’ll know anymore than we already do about what’s really going on. All will likely be revealed in Justice League #23. I don’t know about other readers, but I am completely ok with that. Johns and Lemire can mystify me all they want. This is one ride I never want to get off. 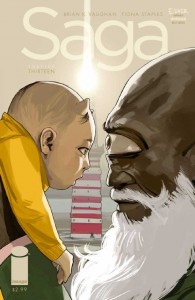 Saga is back and as beautiful as ever. Both Brian K. Vaughan and Fiona Staples continue to publish a breath-taking book that takes readers through one of the weirdest space rides ever. Still fleeing from their pursuers, Alana and Marko land on the planet of Quietus. The Will and Gwendolyn remain in pursuit followed by Prince Robot IV. Confrontation is found on the planet surface, but it’s not what you’d expect.

Marko didn’t say or do much in this book, but that was to be expected. He’s still dealing with his father’s death. So, Alana and his mother have been “working together” to care for Hazel. It’s more like his mother Klara criticizing Alana for her parenting choices, but that’s also to be expected. She’s a strong woman and wasn’t exactly happy when she found out about the couple. Still, Hazel is their connection and it’s a good thing that Marko is temporally out of it, because it’s presenting the two a much needed opportunity to bond.

There’s not a whole lot to say about the writing and art other than they remain amazing. No, they are phenomenal. Both are consistent from book to book. They blend into a cohesive whole and together they excite during battles, humor during the jokes and cry during the emotional scenes. All comics need to be this good.

This series has been on break so Vaughan took the opportunity to remind readers about who and what was going on. But, he did this effortlessly and then moved on. Someone Marko and Alana previously fought is telling the tabloids their story which may have interesting results. We already know how their relationship is viewed by some of the more extreme characters from both sides of the war, but what about everyone else? We’ll have to wait for next month’s issue to find out. 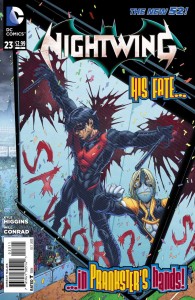 Art by: Will Conrad

What started as a hunt for a murderer has become a grand hostage situation by a super villain. Prankster is terrorizing all of Chicago until the Mayor repays the money he stole from the citizens by harboring criminals like Tony Zucco. Nightwing must now save as many lives as he can while he searches for Prankster. Help comes to him from the unlikeliest of places. Kyle Higgins delivers a thrilling story that sets Nightwing against his own Joker.

I’ve had some difficulty getting exciting about this story arc, but this book quickly changed that. Nightwing is quickly becoming a hero to the citizens. It was great planning on Higgins’ part to have Prankster to reak havoc because it’s been the perfect method to changing their attitudes toward masked heroes. Consequently, they are all turning against the Mayor. Protestors surround City Hall, demanding that he return the money he stole. I’m still on the fence about this situation. If the Mayor is as terrible as Prankster makes him out to be, I wish Higgins had developed it more. Also, as I predicted in last issue’s review, Tony Zucco made the right decision to return and help Nightwing stop Prankster. All it took was his wife disappointment in finding out her husband was not the man he claimed to be. Seeing his son “do the right thing” after his speech was the final push he needed.

Will Conrad’s art remained consistent with the last issue, if not better. Thankfully, Dick keeps his mask on so it’s not difficult to recognize him. More importantly, it’s going to be interesting to see how Nightwing reacts to not only Zucco’s surprise appearance, but his offer to help stop Prankster. I’m actually excited about the next book! Hopefully I’m not the only one because this series has been getting amazing since Nightwing moved to Chicago.