We are trying something different this week in regards to comic book reviews. Each week each member of the team will pick three books from their haul to review. Then out of all the books we review we will each pick out book of the week and post what the book was and why we picked it. Currently we have three people in the team and we hope to increase this as well as make improvements along the way! So please stick will us and we hope you enjoy seeing more reviews! 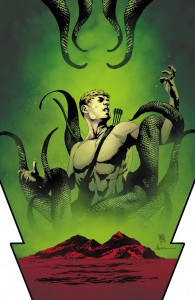 John Lemire accomplished something that other DC writers have been struggling: he took a poorly conceived, failing comic and flipped it. Prior to taking up the character, there wasn’t a single memorable story arc. Oliver Queen has been stripped of his identity. His bow and quiver the only remnants of who he once was. And he’s running out of arrows! Issue 21 completes the first arc and gives us a glimpse of the journey ahead of Oliver as he vows to become a better Green Arrow.
The storytelling of this entire arc has been so good that it rivals other A-level DC books. Since issue 17, there have been glimpses of Oliver in Black Mesa, Arizona. This issue is the pay off about what happens there. Magus explains what happened to his father through drug-induced visions. The reason his father was on the island is finally revealed. The Queen family is one part of a clan of seven, formed around weapons. Theirs is the Arrow Clan that Oliver’s father tried to train him into. His resistance led his father to find a protege in Komodo. In essence he was the opposite of Oliver. Therefore he saw himself as the rightful heir to Queen Industries and the Arrow Clan. While searching for an ancient arrow that was possessed by the clan leader,Â Komodo killed Oliver’s father. Because of this, Oliver finally has some motivation and purpose to fight crime. Seeing him lose everything and struggle to stand back up on his feet was the kick in the pants the character needed. He’s finally a hero readers will want to root for and someone readers will care about.
Green Arrow’s story continues as he goes on the offensive to track down Komodo. Gone are the trick arrows, the millions of dollars to develop them and all of Queen Industries. Instead, Lemire and Sorrentino have given readers a Green Arrow they deserve.
Review Score: 7/7Â 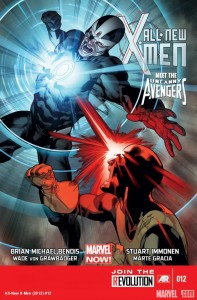 There’s a double standard in the Marvel universe where it concerns mutants, particularly the X-men. In House of M, the Scarlet Witch eliminates all but 200 mutants on the planet. Several factions tries to take advantage of the situation by killing the remaining mutants. These efforts culminated in an all-out assault on the island of Utopia. They managed to survive with the help of Cable and Hope Summers, but not without mutant casualties. All these events happened because of the actions of the Scarlet Witch. Issue 12 of All New X-men reminds us that even though she committed genocide, it apparently pales in comparison to what Cyclops did at the end of Avengers Vs. X-men.

The Young X-men find themselves face to face with the Uncanny Avengers. Captain America and Havoc were looking to question them about a string of robberies that were supposedly committed by them, but were actually committed by Mystique, Sabertooth and Mastermind. Here’s what was enjoyable about this issue. The Young X-men –particularly Iceman– are shocked to see that the Brotherhood of Evil Mutant’s Scarlet Witch is an Avenger. Jean Grey reads her mind and discovers what she did to the entire mutant race. Her reaction and the Scarlet Witch’s response brings to light something disturbing about the aftermath of Avengers vs X-men: Why is the Scarlet Witch forgiven after what she did but not Cyclops? This is a question that is asked in this issue but is quickly brushed aside by Captain America. Hopefully future issues will come back to this because it is something that desperately needs to be addressed. To digress, young Cyclops and Havoc had a touching moment which ended in a big, mushy hug. Captain America was a dick as usual though there are many readers who won’t necessarily agree. This encounter with the Avengers went about as well as one could predict.

While this issue was frustrating, it was quite enjoyable. The art and writing remain some of the best that Marvel has to offer. That aside how long can this series last before the Young X-men are returned to the past? Now that they learned what happened to the mutant race, how will affect them? Will Jean Grey be more sympathetic to present-day Cyclops? This issue proves how amazing the series is and every X-men fan should have it in their pull-list. 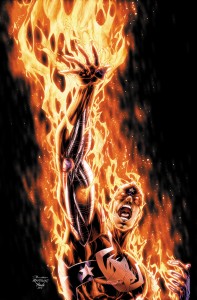 The stage for this issue was set in the Earth 2 Annual #1 which was released a week ago. Readers were treated to the Atom’s origin along with the surprise appearance by the new Batman. Like his predecessor, he packs some deadly weapons. Commander Khan decides to send someone into the fire pits that were created during the Apokolips war. Captain Steel is the man chosen to investigate, but not even his metal body is enough to protect him from what he discovers inside.

The pacing of this issue was superb. James Robinson effortlessly builds up a story that manages to hit plot points and fluidly leads into the inevitable last-page surprise. Captain Steel’s origin was refreshing because it’s based more in science than in the supernatural or mystical like The Flash, Hawk Girl, Green Lantern or Doctor Fate. As a child he suffered from a disease that was slowly destroying his bones. His father managed to cure him by bonding a metal substance to his bones, limbs and some of his vital organs. He also gained super strength and the ability to control machinery. This is why Captain Steel is chosen to enter the fire pits. If the craft he pilots is corrupted by the energy of the pit, he will be the only one able to control it. Meanwhile, Hawk Girl is in a China graveyard, but is attacked by men riding giant Apokorats. These are some of the best panels in the book because they show Hawk Girl flipping and flying through the air to dispatch her aggressors. The illumination from the full moon on the graveyard creates an eerie backdrop for the battle. Batman makes another surprise appearance only to “ninja vanish” in a cloud of red smoke. Finally, Robinson gives the ultimate tease when Captain Steel staggers out of the fire pit. He’s burnt and missing an arm, but manages to warn everyone about the Red Lantern. Not much is revealed about her but hopefully we’ll find out more in the next issue.

Overall, this issue will keep readers satisfied. It’s apparent from the pacing and events that the next major story arc is about to kick off and it’s going to be big. A few minor question that arose with this issue concerns how Earth 2’s Lanterns are created and where they derive their powers. In the first arc, we saw that the Green Lantern gets his from the Earth, referred to as The Green. Grundy got his powers from rot/decay/death, referred to as The Grey. If all the Lanterns powers are tied to the Earth, does that make him a Black Lantern? Does this also mean the upcoming Red Lantern will derive her powers from The Red? These questions will likely be answered at some point, but one thing is for sure: Robinson’s final 3 issues are shaping up to be very exciting.