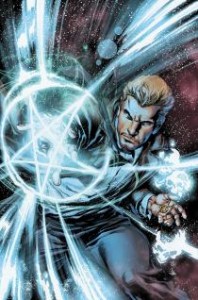 Breaking from the action of the past 3 issues, this book moves plot points forward while teasing the impending Trinity War. A day off for John is as trouble-ridden as you’d expect for the character. He’s rounded up by a group of men and taken to see Papa Midnite, the Haitian Sorcerer of the undead. Stealing a magical object from Midnite is about to cost him an arm. Naturally, he escapes unharmed and spends the rest of his day visiting ex-girlfriend Zatanna and dealing out justice to a low-level con-artist.
Since the first issue, it was established that Constantine is an anti-hero: selfish, untrustworthy and willing to do whatever to get what he wants. So it was surprising in this issue to find out such a man actually has people that like him; people he can call friends. He betrayed both Zatanna and Chris but there was someone who cared for him enough to think of him as a son and another that worries for him like a mother.
Working off plots established with Lemire, Ray Fawkes takes over script writing for this issue. The opening shows John in trouble but teases his inevitable escape. This was well done because it makes you read on to find out what John “did this time”. Subsequent pages shows the events leading to that scene, how he escapes and then moves on. What happens afterwards seems most important because John visits Zatanna and learns about an impending war between superheroes. During which John will align himself with Lex Luthor. He dismisses it but it reinforces the idea that John isn’t above an alliance with anyone if it’s necessary.
Each issue gives a glimpse here and there of the goodness in John. There were several here but the one that stood out the most was at the end. After surprising a guy following him into an alley, he takes the money from his wallet. Since the guy had previously conned a store clerk out of $9, he returned to pay it back. That was unexpected, but went a long way to remind readers he’s not as bad as some of his actions make him appear.
The only major complaint with this issue is in the art style. It’s mostly excellent but Â every character has the same expression on their face. John and Midnite look excellent throughout the issue, but facial expressions and action scenes need work. The scene with Midnite wasn’t thrilling enough and John’s beat down in the bar just felt flat. Lastly, there was some odd dialogue between John and Zatanna. She was annoyed with his visits and wanted him gone but quickly became more talkative when asked about her divinations. It wasn’t a smooth dialogue transition and momentarily broke the flow of the book.
Lemire and Fawkes may have been moving plot points forward in this issue but they managed to remind readers that John isÂ a good guy and sneak in hints about the upcoming Trinity War. The death of Catwoman in Justice League of America issue 4 could be the start. Readers should jump onboard this comic because John Constantine will be involved in shaking up the DC universe this summer.
Review Score: 5/7

Guardians of the Galaxy #3 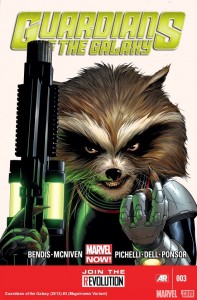 The Guardians of the Galaxy are heroes after saving London from Badoon invasion. Now, Captured by the Spartax Royal Guard, the guardians await their prison sentence for entering recently restricted Earth space. While the series began with a solid start, it’s a shame this issue took an early break on action to focus on the villains and their intergalactic politics.

J-Son, the king of Spartax has quickly become an unlikeable character. Either time has made him the man he is now or he was always horrible but showing that would have messed up the stranded-alien-on-the-run story from issue 1. Now, he has this estranged relationship with his son Peter Quill, the Starlord. An alliance with other major alien races in the galaxy has been struck with the sole purpose of keeping Earth off limits. This resulted in it becoming a target and the Guardians coming to the rescue. It’s crazy to think that J-Son’s plan was to make an example out of Starlord, but that’s what it appears. It’s cracking an already fragile alliance with the other alien races. As for the other characters, Iron Man was Iron Man in this issue. There’s not much that really needs to be said. He called the Avengers for help but there’s no indication the message was received. Overall, he felt out of place more in this issue than the last. It’s time for him to depart and let the Guardians have their own adventures.

This issue may have looked great–especially the beautiful space shots– but if it doesn’t maintain the action or give all characters enough panel-time than it’s going lose the interest of many readers. At only issue 3, it’s dangerous territory to have readers walk away feeling bored by what they just read. Many of which are new to this series. Marvel is clearly putting a lot of resources into making this a success so maybe this issue was a small misstep. Readers should give the next issue a shot before looking elsewhere to satisfy their interests in the “defenders of the galaxy” genre. 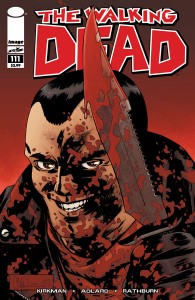 It feels like forever since a new issue of The Walking Dead has hit the shelves. Regardless, this issue continues to slowly push the story to an inevitable confrontation. The three communities are preparing for war against Negan. Rick and Jesus have taken up a brief residence at The Kingdom with Ezekial to train, make ammunition and plan their attack. However, they aren’t the only ones with plans.

It’s interesting to watch Michonne –typically a very guarded character– begin to let her guard down as she gets closer to Ezekial. She goes to bed smiling and tosses her sword on the floor. A mistake she quickly fixes by picking it back up and sleeping with it. Negan springs his own surprise on Rick’s community by showing up a few days early for supply pick up. In an unsurprising move, Spencer foolishly takes advantage of Negan’s presence to try to have Rick removed as the community’s leader. Negan exposes him as a coward and cuts out his guts. He then goes off to play pool. The character has had a very tense relationship with Rick and this second coup attempt was completely logical. Readers that have been annoyed by Spencer won’t miss him but the lack of surprise in his actions is a bit disappointing.

This series moves at a leisurely pace, which can be too slow for some readers. However, it’s part of what builds the suspense. Clearly, things for the three communities have been going a little too well; finding an ally in Ezekial and the tools to make ammunition. Three things are certain: 1. Negan doesn’t know what’s going on; 2. Negan knows and is waiting for the right moment to crush the rebellion; or 3. Negan doesn’t know but the communities grossly underestimates his defenses. Regardless, the suspense is building to a big, bloody conclusion.

Negan’s visit to Rick’s community is troubling. If he suspects what Rick is doing, he won’t be giving him a slap on the wrist. Just like Glen, someone will pay for Rick’s actions. Something very, special is in store for the 10 year anniversary of the series. The series author Robert Kirkman doesn’t believe readers will be ready. Find out if he is right by picking up next month’s issue.