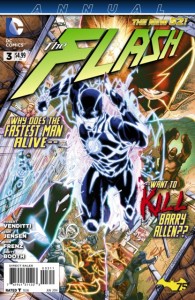 Fastest Man Alive becomes Slowest Man Alive. Something is off about The Flash’s control of the speed force; using it seems to cause a loss of time. Twenty years in the future, The Flash can control it so well, he’s using it to travel through time. Meanwhile, a relative of Iris West makes his official debut in DC’s New 52. Robert Venditti and Van Jensen’s big time traveling story will keep readers entertained with the introduction of new characters, teases of old ones and a shocking moment that’ll leave readers speechless.

Second book into the Venditti/Jensen run and I’m still fascinated by the scale of the story. Using time travel to set the stage for their vision of The Flash is a bit of a gamble because we’re essentially seeing an alternate future. Fates of certain characters are revealed but it basically amounts to very little because it could all change by the end of this story. It’s fascinating to see a future in which The Flash has been a bit hardened by mistakes he made in the past. A fight with a longtime enemy ends in one of the most shocking moments since the hero’s New 52 relaunch. I couldn’t believe what my eyes were seeing. Especially after comments made by The Flash in the preceding scene. Venditti and Jensen certainly made quite a mark on the title so early into their run. Two familiar characters also had appearances in this book (one was only mentioned though). Future Flash’s story overshadowed the present day events but there were some interesting moments. Wally is definitely bi-racial and a bit of a delinquent. Iris’ explanation of how they were related and why Wally misbehaved was well written, though a bit overdone. Also, Wally just didn’t leave a memorable impression. Hopefully Venditti and Jensen have more coming down the line that’ll get readers more excited. The revelation that surprised me the most was the mention of a certain genuis from the 25th century. Nothing to get too excited about but it confirms the character’s existence in the New 52. Could be more than just an Easter egg.

Two artist were needed to tell this story and I found myself enjoying the guest artist the most. Brett Booth did pencils for the present day scenes and Ron Frenz did all the future scenes. Latter was certainly much more entertaining because it was less of a humorous style and more sleek, darker. Frenz adds a level of depth to scenes and panel layouts that make pages exciting to read. The style brings Venditti and Jensen’s big story to life better than that of Booth’s.

So far the most interesting aspects of this story have been the missing time The Flash encounters every time he uses the speed force and Future Flash. Venditti and Jensen are going big with their run and putting a lot of pieces in place for whatever they have planned. While the art hasn’t been particularly memorable, there’s enough to keep me invested. As long as the duo can deliver on their promises, this should be the start of big things to come for The Flash. 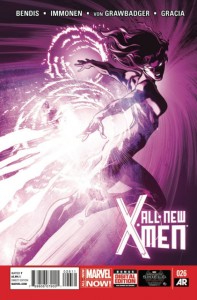 Awkwardly awesome things happen in this book. The young X-Men are recovering from their exhausting trip into space in their own different ways. They’re not the only ones as Laura, X-23 is feeling burned by young Cyclops abrupt departure. Her own departure from the team will lead some familiar foes right to the X-Men’s secret home. Brian Michael Bendis and Stuart Immonen waste no time getting this title back into excellence with the start of a new story.

There’s a moment in this book that weirded me out. It involves two characters alone in a bedroom at night. At first, I didn’t think anything of it besides one character comforting another after experiencing a nightmare. Then things got a bit weird. Like, creepy weird. It doesn’t end the way you think but this title is better for what happened because it was a moment that was bound to happen and now we can move on. There was a scene that followed this one that made me roll my eyes mainly because I felt Kitty overreacted. Another character acting similarly was Laura. Now that young Cyclops is off in space, she’s leaving. For me, the best thing about this was finding out what young Iceman calls Laura. After the boring book that was #25, I’m glad we’re back into the story because I have missed young Iceman. I can’t get enough of how Bendis writes him and this one scene made me laugh out loud, literally. People looked at me like I was crazy. I didn’t care because it’s these moments that make this book so fun and enjoyable to read.

What I enjoy most about this series is how it always manages to make me smile every time I read it. Regardless of what books are on my pull-list, I always look forward to reading it because Bendis writes it so well. Just reading the book you can tell how much he enjoys writing stories like this.

Twenty-six issues into the run and this series isn’t showing signs of ending any time soon. Especially with Cyclops out in his own on-going title, there’s still much more stories to tell with the young X-Men in the present day. Sure, there are plenty of mentions about their presence being a problem, but a resolution doesn’t appear to be on the horizon. In the meantime, we can continue to enjoy watching Jean Grey’s new powers develop and Cyclops spending time with his space pirate father. If the end of this book is any indication, Battle of the Atom round two may be about to arrive at the X-Men’s doorstep. Nothing but exciting things coming down the pipe for All-New X-Men.