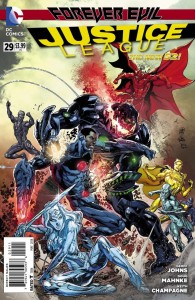 Cyborg leads the Metal Men against Grid as the battle to save the Justice League (and Earth) begins! Everything that Geoff Johns and the talented creators at DC have been building towards since last summer is finally coming together. Justice League #29 is an exciting book that teases an explosive Forever Evil endgame.

Given how much I enjoyed the last book, reading this first was a no-brainer for me. Doug Mahnke is on pencils but his artwork didn’t bother me at all. His style is usually hit or miss but I found it enjoyable for this story. He draws robots, scary villains and battles well; this book was filled with them all. What surprised me most was how amazing Cyborg looks when Mahnke draws him. The extra lines, squiggles and cross hatching he uses to give human faces a more organic look blends well with the robotic parts. Even the Metal Men look wonderful. This is the first time we see Cyborg fight in his new armor and thanks to Mahnke it looked spectacular!

Johns somehow filled this book with 48 pages of content. We see the Metal Men brought back to life, the battle with Grid and other super villains, Steve Trevor’s arrival and teases into the upcoming final battle with the Crime Syndicate. The fight with Grid is especially long. While I didn’t much care for the “robot wants to feel” motivation for Grid it was interesting how Johns utilized it in this battle. I walked away feeling very satisfied with this book. 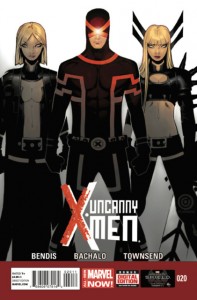 Maria Hill and the rest of SHIELD can go play in traffic. For far too long have they wrongly accused Cyclops and the X-Men for being terrorists. That all changes with this book as Cyclops declares war against SHIELD. As a big X-Men fan, this was an excellent story.

Brian Michael Bendis has been slowly building up to something in Uncanny X-Men. It’s been excruciatingly slow and many of the times it lead to books I flat out disliked. Thankfully, that all seems to be changing. For the first time in a while, I couldn’t put this book down. Artwork is finally on point and the story has direction. It’s everything I’ve been asking for since last year. Most importantly, the characters are finally coming back to life. Cyclops developed into a strong, strategic, self-motivated leader. Staying so far ahead of SHIELD even impresses Maria Hill (much to her embarrassment). It’s clear after reading this book that much of its energy comes from Cyclops. Someone within SHIELD is sending the Sentinels and he’s determined to find out who and why.

Unlike its sibling books, Uncanny X-Men truly is the continuing story of the X-Men fighting for mutant equality. It has taken on a sharper tone since the conclusion of Avengers Vs. X-Men but it’s a natural change given everything that has happened to mutants since House of M. There’s a revolution coming and Cyclops is leading the charge. 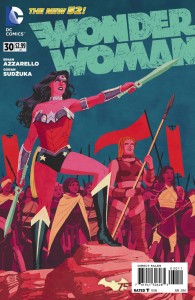 You can’t keep a good story arc down. Wonder Woman #30 finally heads towards the conclusion of the war for Zeus’ throne. A newly empowered Hera frees the Amazons and Wonder Woman prepares them for the coming battle. A mysterious stranger on Paradise Island is sowing discord that could undermine everything.

Hera has grown into a much more likable character since her first appearance. I remember smiling as I watched her go through the various stages of loss. When she reached depression, I actually felt sorry for her. Being powerless was the best thing to ever happen to her because it made her compassionate. There was also a friendship that grew between her and Wonder Woman and we see that in this book. While she can’t return to Olympus, surely she could hide somewhere else but Paradise Island. She doesn’t. It’s her choice to stay with Wonder Woman, return her sisters to human form and stand beside the woman she once despised. It was quite the character development and it’s the one thing about this book that I enjoyed reading.

Wonder Woman’s new friends don’t exactly go over well with the Amazons. After spending the last five years as snakes, they’re even less trusting of strangers. Especially when one of them turned them into snakes in the first place! As much as I would have liked them all to be happy to be back to normal and fall in line behind Wonder Woman, it’s a good thing there is some discontent among them. No Doubt Brian Azzarello will be using it to strengthen their sisterly bonds in the upcoming battle.

Wonder Woman #30 brings Azzarello’s run back to its beginning. He obviously knew he wanted to come back to Paradise Island at the end of his run. It’s paying off because while the story is not over, there is a sense of closure. I’m willing to bet the battle will take place on Paradise Island. There’s a twist at the end that will shock you. If you’re like then you’ll be anxiously waiting to see what happens next.