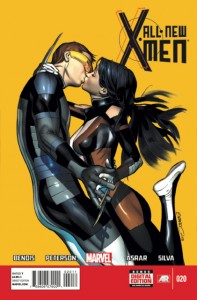 The X-Men rescued the female clone of Wolverine and brought her back to their Weapon X hideout! When she finally wakes up, the X-Men find out who kidnapped her so they can shut them down. Brian Michael Bendis takes an awkward situation for the X-Men and uses it to show what sets them apart from their present day counterparts.

Still. Loving. These. New. Suits. The young X-Men look great in them and if this is one change we got out of Battle of the Atom, then it was certainly worth it! Bringing X-23 into the X-Men’s Weapon X hideout could be a risky choice. This is acknowledged but with the X-Men helping to go after her kidnappers, I doubt she will say anything to Wolverine. Although I am sure this will still come back to bite them in the ass later. X-23’s kidnappers turn out to be another religion-motivated anti-mutant group, but there’s a small twist in the end. Reactions from the young X-Men about this group already show that this will be a good enemy for them. They’re used to being hated because they are different, but being hated for religious reasons is very new for them.

Not entirely feeling the art in this book. It’s decent and the artists should be commended for doing a great job, but it was distracting for me. While reading this book, I kept wondering why the art looked different. It’s a similar style as before but there are noticeable differences like how the facial expressions are drawn. Changing artists on a book is fine and all, but the style should change too. Bringing on artists that can duplicate the style is distracting because readers won’t get completely drawn into the book if they are too busy wondering what’s different about it.

Despite my doubts about the ongoing potential of this series, I continue to find it enjoyable. This book does an excellent job at showing just why. The young X-Men are still innocent and their comments during their battle are exactly why I continue to read this book. I can’t wait to see what happens next and how/if the events affect Uncanny X-men. 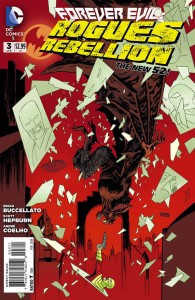 Nobody puts Heatwave in a corner! The Rogues flight from the Crime Sydicate lead them straight into the gardens of Poison Ivy. To escape, they must find a way to bring sunlight to her plants. Brian Buccellato produces another successful book by drawing on his strength at writing character relationships.

The single greatest aspect of this story continues to be the relationship between the Rogues. They aren’t evil by any means; criminals who have a sense of honor and loyalty to one another. Buccellato has executed this well across the story. There have been instances where they could have abandoned one another such as when Heatwave was injured and Mirror Master could have left him. He didn’t because I suspect that on same level, they see each other as friends. In fact, the only reason they were put in that situation is because they were helping Poison Ivy in order to save Trickster. The bond between these villains has been executed better than some of the superhero teams at DC. That’s something Buccellato seems to do well.

Art style has been my only complaint about this series and it continues to reamain. As I said in the previous review of Rogues Rebellion #2, what’s going on in the DC universe is too dark and serious for a “cartoony” style. It’s distracting. This isn’t a criticism of the artist because in any other situation the style would be fine. If the Rogues got their own on-going series, I think having Scott Hepburn illustrate it would be great. But, this isn’t a style best suited for this particular story.

It’a tough to tell where Buccellato is going with this story. Contrary to the title, the Rogues have done more running from the Crime Syndicate than rebelling. With only three more issues to go, readers that don’t enjoy the characters may have already abandoned this title. In my opinion, whether Buccellato reaches a point to their story or not, he’s breathing life into these characters; something that remains at the heart of what makes DC, DC. 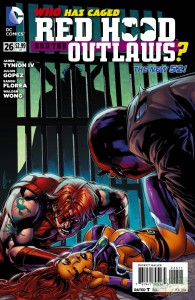 Red Hood and the Outlaws #26

Jason Todd uses his ruby slippers to return home! Arsenal’s assault on ‘Eth Alth’eban was a failure and now he and Starfire are prisoners. With the Untitled destroyed, Ra’s Al Ghul claims their power and rises from the shadows. Red Hood must reclaim his memories in order to save his friends. James Tynion IV delivered an exciting climax to a story that may leave some readers a bit confused.

Red Hood and the Outlaws has become a book that focuses on the friendship between Jason Todd and Roy Harper. Starfish is there too, but the drama between the boys has taken center stage. Roy’s refusal to let Jason forget their friendship has led them to the moment in this book where Jason must choose to recover his memories in order to save all their lives. Thanks to Roy’s stubbornness, we got a satisfying turn of events.

There was a twist at the end of this book that still has me perplexed. The reappearance of a certain villain is great, but Tynion abruptly switched the antagonist to an unlikely character and I can’t figure out how or why the change was made. Either I need to go back and re-read this entire arc because I missed something or it was poorly executed. I’m going to assume it’s the former. Still, it might have been a good idea to hint that to change was coming especially since it’s been several months since this arc began.

Red Hood and the Outlaws was a title I found myself surprised to enjoy. I never really cared for Jason Todd or the Red Hood but his stories always seem to pull me in. He does share some similarities with Batman because he never seems to stop whining about being “betrayed” by Batman but it’s getting easier to tolerate. Still, glad the trio is finally back together and I can’t wait to see how this story concludes next month.