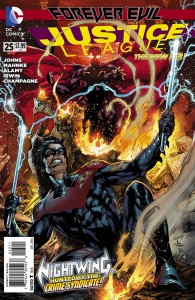 Birds of a feather, kill together. Or at least, that’s how Owl Man would like it. Geoff Johns delivers the story behind the man behind the metal cowl. His interest in Nightwing and why the character still lives is revealed. Justice League members or not, this book continues to excite and intrigue as it switches into providing backup to Forever Evil.

Earth 3 is one hell of a twisted place to have produced villains instead of heroes. Owl Man, just like his Batman counterpart is a fascinating character. They both share a common traumatic event that shaped their futures but the specifics greatly vary. We see that story played out beautifully in this book. As the polar opposites of the Earth Prime Wayne family, the Earth 3 Waynes won’t exactly leave you sympathetic about their death. Rather, putting Thomas Wayne, Jr. and Alfred at the center of it shows the strength of the bond between the two characters. Which makes Owl Man’s interest in Nightwing and control of Earth Prime entirely believable.

Doug Mahnke’s art is always a hit and miss with me. While I believe his style is perfectly suited for telling a dark story like this, he should have went with tighter shots and angles. His art tends to look more “cartoony” at distances. Which kind of detracts from the story.

I don’t know how much longer Forever Evil is going to go on but if each issue of Justice League focuses on telling the backstory of each Crime Syndicate member, I’ll be happy. Johns clearly has direction and purpose with each page. These characters are well developed and stand on their own well. As twisted as they may be I would enjoy reading their individual stories prior to Earth 3’s demise. Well, provided Johns wrote them. If the ending is any indication we might be getting Super Woman’s story in Justice League #26. 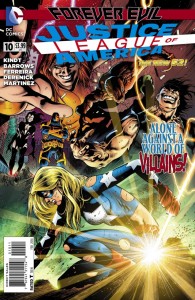 Girl unable to focus with Martian in her head! Recently escaped from the Crime Syndicate’s Justice League prison, Stargirl faces a five to one battle for her life. Matt Kindt and the talented team of artists continue their march forward to saving the other members of the Justice League. Justice League of America #10 is an excellent book because it gives insight into one of the more mysterious, and youngest members of the team.

Finally! As odd as I found the news that upcoming issues of Justice League of America was going to focus on Stargirl and Martian Manhunter, I figured there was a reason for it. I now see what that reason was. Being the only character without her solo book, Stargirl’s backstory was never told. Now that we’re finally seeing it, I’m finding it easier to actually care about the character. So, as she’s getting the crap beat out of her I kept shouting (in my head of course) for her to wake up and fight back. Kindt has done a wonderful job writing not only Stargirl but Manhunter as well. He finally seems more like a real character than the cold, mysterious alien he’s been portrayed as since the start of the New 5

Art by Tom Derenick and Eddy Barrows was wonderful but there is something that has bothered me. Somewhere along these books, the artists forgot that Stargirl wears braces. You can see them in the first few issues of the series and then they disappear. It’s kind of disappointing because it shows a lack of attention to detail. It’s my only real gripe about an otherwise great book.