Patch is back! Wolverine and company travel to Madripoor to track down a destructive alien object that they don’t want to fall into the wrong hands. And for those of you who haven’t been keeping up with all of the X-Men titles, Sabretooth is in charge of Madripoor. So this could potentially be a very dangerous mission for our healing factor-less friend, Logan. But as we see Wolverine’s plan to take down Sabretooth starting to come together, you realize that Wolverine may be the more deadly one because he has orchestrated something very special to take down his archenemy! The next issue should be pretty action packed because I believe this is only a two issue arc before 3 Months to Die starts in June. 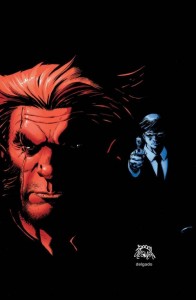 think I’ve ever seen him this calculated and precise before, clearly that vulnerability of not having a healing factor changes you. In this issue we get to see Wolverine working alongside MI-13 with the likes of Black Knight, Pete Wisdom, and Excalibur. Wolverine is so deep undercover he is working with some interesting allies while keeping up appearances for his covert ops strike team.

This is a very fast paced issue; a lot seems to happen in a very short time and the pacing works very well with the artwork. Gerardo Sandoval does some awesome work with this issue, and let me tell you does he do one hell of a Sabretooth! I’m looking forward to the conclusion of this arc as we keep inching closer to Wolveine’s inevitable death.

Rating: 6 (out of 7): I really enjoyed this art and am looking forward to see how Wolverine plans on getting off that island alive.