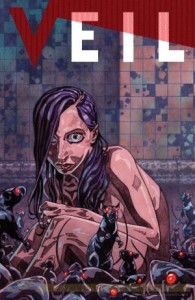 I seem to be on a bit of a streak lately. Literally, in fact. The last two books I’ve reviewed have featured naked, terrifying otherworldly characters within the first 5 pages. However, I think the only way I could keep this up is to review Heavy Metal next week. We’ll see.

Greg Rucka’s latest offering, Veil, gets off to an intriguing and promising start. It’s hard to beat a comic that kicks off with an attractive named woman waking up in a subway who proceeds to bust a rhyme with the local rats before busting her way through an iron gate. She emerges onto the urban streets above in a very seedy and dodgy part of town. Our mystery woman is immediately accosted by the local riffraff and is thankfully led away by the one good Samaritan in the bunch. It’s not a clean escape however, as the gang wants dibs on the lady and follows them home to the issues climatic conclusion. Veil appropriately unveils one of her mysteries and shows off some sort of telepathic or telekinetic power and quickly dispatches all of our would-be evil doers.

Veil’s start is incremental, inching forward from her awakening below the streets to her powerful conclusion. She’s basically a clean slate, only able to communicate and interact with her new world be observing and associating in fine Dr. Suess style prose. It’s obvious the pace is deliberate and we’ll be getting a slow and sure introduction to Veil and her strange appearance and powers as the series unfolds.

This kind of series really speaks to my love of classic sci-fi and horror movies. The mysterious appearance of Veil and her strange countenance, alone with the revelation of her powers, brings to mind so many classics. From Jeff Bridges in Starman, to Kyle MacLachlan in The Hidden, Kristanna Loken in Terminator 3, to those super ugly bounty hunter alien dudes in Critters. They all emerge into their respective stories in an almost larval stage and advance quickly through learning how to be human to displaying great power. I’m very curious to see how Veil will progress now that she’s already found a power set. Will she have to learn the proverbial lesson of “great power/great responsibility” or will she go apeshit and destroy everything in her wake? I can’t wait to see what happens.

Rucka’s first issue is a great introduction and a great work to hook in a reader and give them just enough to know there’s so much more waiting for upcoming issues. There’s very little explanation given so you’re left to your own devices to make up your mind whether Veil is hero, victim or villain. I like the openness of the story and the freedom for it to go any number of directions from here. Fejzula’s art is refreshing as well. It’s not really reminiscent of any particular style, but takes the story and fully embraces it and carries it forward. I like the almost pastel palette and the blocky heavily lined art style. It’s like a flattened out version of Aeon Flux. Good stuff Maynard.

If you dig sci-fi, horror, with some mystery thrown in, then this could be a promising book. It’s also ground that has been covered before in many other mediums, so I’m hoping Rucka can give us something fresh and original to keep us wanting to know what happens next. It’s a good start, and a good book for fans of naked introductions everywhere.

Score: 5 (out of 7) I once saw a naked woman crawl out of a subway. She did not explode any brains but merely asked for money. Never been so disappointed in my life.