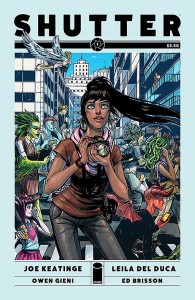 I’ve been a big fan of what Image has been doing for the last couple of years.Â  With books like Saga, Manhattan Projects, and Deadly Class (just to name a few) they’ve really shown, to me anyway, that they’re very open to intriguing and refreshing ideas.Â  So, when they come up with another #1, I’m usually inclined to at least give it a shot.Â  This time, it was Shutter #1.

I’ve read some of Joe Keatinge’s other work at Image, including Glory and Hell Yeah; both of which were quite enjoyable.Â  Both of those books have some similarities, including some intense violence and a more off beat art style.Â  Shutter is a departure from that.Â  Leila Del Duca’s layouts and design sense give this book the most cinematic feel of anything Joe Keatinge has worked on at Image to date.Â  Additionally, the little touches she adds into the background, like more foliage in New York City in the not too distant future, gives this book more subtle world building.

The story itself is a bit more subdued than some of Joe Keatinge’s previous outings in terms of violence, at least so far.Â  I was expecting maybe someone getting cut in have or something along those lines, but not quite here.Â  That is by no means a bad thing.Â  I think it’s the sign of a good writer to be able to switch things up like that.Â  The story follow Kate Kristopher as she goes from an optimistic girl with her head in the clouds to a young jaded woman.Â  That’s an impressive amount of story to cram into a first issue of anything; especially a regular sized issue.

First issues of creator owned properties are always really tough.Â  You really need to get as much into it as possible, somehow get an audience to care about these characters that they still don’t know and probably won’t for at least a few more issues, and leave enough of a hook at the end to get them wanting more.Â  The story was compelling enough to get me to want to pick up the next issue.Â  The hook itself was a bit too out of left field for me, but I had already made my decision before getting to the end of the issue.

Score: 6 (out of 7) This is a solid creative team, and Joe Keatinge is definitely one of the writers to be watching right now.