When you’re on a mission, you see that mission through to the end. No matter what the cost. 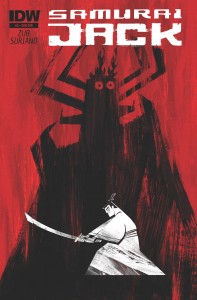 Samurai Jack knows this. And it is with all the courage and strength that he can muster that he searches for the final time thread right in the heart of evil Aku’s lair for the final issue of the Threads of Time story arc.

Samurai Jack #5 brings us to the final portion of Jack’s quest to obtain the last thread of time. Jim Zub delivers a solid wrap up issue here that provides a recap-splash page (which is beautiful), lots of action and a look into the true character of our focused hero. As with all the previous issues, Zub finds a creative way to incorporate the all important “thead of time” which is a bit silly and bizarre but is better than a clichÃ©d “bad guy holding a valued item scene.”

This is a fun end to a highly entertaining storyline but I did have a few problems with it. Firstly, it is paced rather quickly and before you know it the issue is over. Part of the pacing problem is that nothing really develops here – the book races to a climactic peak, halts, and then finishes. It’s the final issue, so I understand if the goal is to end it, I just wish this book had the heart some of the previous issues had. My other issue is with the villain, Aku. Â We’re introduced to Aku who’s a goofball one minute and then evil the next; it’s an unbalanced and odd portrayal of a villain who is meant to be supremely powerful.

The highlight of this issue and what really carries it is the art team of Andy Suriano (pencils) and Josh Burcham (colors). These guys working together make magic on the page. This is one of those rare issues where you could remove every word from it and the art would tell the story with clarity. Suriano’s visuals drag your eyes from scene to scene marinating you in heavy blacks, broken panel borders, kinetic and exaggerated scenes and lighting fast lines. All while Josh Burcham colors the pages with a contrast of reds, yellows and oranges while splashing a color from the cooler side of the spectrum here and there.

Samurai Jack #5 is definitely worth picking up and reading, it doesn’t have as impactful or poignant of an ending as I was hoping for but it’s a fun ride with great art.