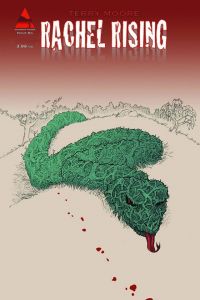 Horror is a tough genre to pull off in comics. It’s not that comics can’t elicit a scare through gore and storytelling, but I’ve always felt that the pacing from panel to panel and page to page had to be perfect to generate any fear about what could be lurking on the next page. That’s the hook for scary movies, the build up to what is just off camera until it pops up and scares the shit out of you. Comics have one major drawback in that you can physically see two pages worth of “camera” at a time. If you’re anything like me, it’s impossible not to peek ahead.

Terry Moore, however, is perfecting the craft in Rachel Rising. This book is a slow burn, each page slowly building tension throughout the issue to what has become Moore’s signature ending for this title, an abrupt halt to the story leaving you staring at the page, wondering where this could possibly go next. The beauty of this title so far is that it’s not horror for the sake of shock value or a cheap scare. Somehow, the characters, the pacing, the town the story is set in, are all just incredibly creepy. And that’s true horror to me. A constant low level vibe that something just ain’t right.

This issue continues with Rachel, our undead/reincarnated witch working her way closer to the pieces of the puzzle of just what the hell she’s doing walking around Manson with her nasty neck wounds and creepy grey eyes. After she and Jet (also reanimated, pick up the trades!) managed to capture the spirit of her dying Aunt Johnny and trap it in the family dog, a new experiment begins. Calling on the very creepy and untrustworthy Dr. Siemen, they tackle the philosophy and the problem of how to get Aunt Johnny’s spirit back into her own body. We then shift to Zoe, probably most disturbing and evil little girl since Regan from The Exorcist. Not an issue goes by without this kid completely flooring me with her simplicity and brutality. She’s a pint sized engine of death and destruction and somehow it’s delightful to watch. I feel all little dirty after each issue, having enjoyed her latest kill of an innocent goat or overconfident fat adults.

It’s hard to encapsulate everything I love about Rachel in the review of a single issue. I really don’t even want to dwell on the plot points too much, as even after 21 issues I feel like we’re still in the midst of the first act of an amazing movie. I hope Moore carries this book well past the 30 issues that his previous title Echo ran for. Rachel deserves it, and there’s enough depth to this book to give even Strangers in Paradise a run for its money. 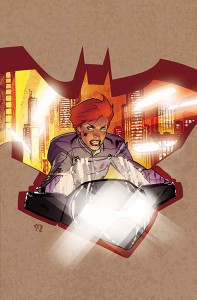 I can sum this issue up pretty quickly: No J.H. Williams III. And just like that, Batwoman becomes just another crummy New 52 book. It’s a sad and stark realization that the thing that made Batwoman so special is probably gone forever.

This is a very pedestrian issue in pretty much every respect. It’s a plain vanilla coming of age story, following Kate on leave to attend a funeral with her father. She arrives on the heels of a massive storm and of course crime and looting follows close behind. Unable to resist the urge to fight crime and help innocents, we see the beginnings of Kate’s rise as Batwoman and some very thin insight into her stubbornly determined nature. Otherwise, that’s really about all you can say about this book.

For an issue with fair to middling artwork, for some reason it took four artists to pull it off. Not surprisingly, Williams dramatic style has been completely abandoned. Previously, McCarthy pulled it off nicely on his fill-in issues but there’s nothing special left here. Also, for some reason, Bruce Wayne is depicted with a closely shorn military haircut. I’m not a big Batman fan so maybe there’s a reason for this, but it looks completely out of character.

Personally, Kate’s story of late had been lacking and I was hanging on for Williams’ art alone. Now that he’s gone, I suspect Batwoman will be missing from my pull list next month.

Score: 3 (out of 7) Kate should really take some iron. Her title, and her complexion, sure look awfully anemic. 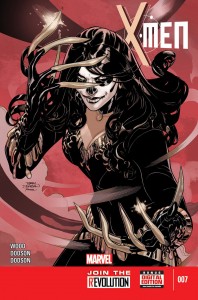 There sure is a small revival of 90’s X-Men characters going on right now. This issue not only brings back the creepily fingernailed Lady Deathstrike, but also Monet St. Croix (also known as M and Penance) and fan favorite Typhoid Mary! Ok, that last one’s a stretch, but I seriously haven’t thought about any of these characters in ten years. I hope next issue brings us Omega Red!!

This issue was a nice break from the onslaught of Battle of the Atom books. Starting what appears to be a nice self contained storyline, it brings longtime X-Man Monet back into the fold while Karima is recovering from her possession by Arkea and working her way back to becoming a regular old human being. Lady Deathstrike re-enters the fray by bonding with rich heiress Ana Cortez and begins scheming to upgrade her tech with what she thinks is the dormant Omega Sentinel hardware. Hijinks and hilarity ensue.

So far the all-female X-Team concept is holding up fairly well. The only catty conflict brewing appears to be between Jubilee and Monet, and thus far it seems slightly manufactured. I’ve always found Monet to be overpowered on any team but she brings much needed muscle to a group that is weighted heavily with telepaths, brunettes and a single vampire mom. I’m also happy to see that such a formidable and powerful enemy as Arkea isn’t simply being forgotten as we move onto the next arc.

I was extremely pleased to see the Dodson family handling art chores for this book. Terry’s pencils are always top notch, and his rendering of women rivals Adam Hughes on the voluptuous scale. Wood’s script is sufficient but I feel like Lady Deathstrike’s reintroduction is a bit rushed and a bit more out of left field. But I can see where her motivations for the Arkea tech make sense and I’m willing to see this arc through. I also really like Deathstrike’s new La Muerta look even if we’re seeing it all over the interwebs these days. It’s creepy and fitting for a character that continually returns from the dead. I’m looking forward to seeing all these lovely ladies punch and scratch each other over the next few issues.

Score: 5 (out of 7) All we need is a cameo from Spiral and The Phalanx to return as a sexy swarm of nanobots to round out this feel-good 90’s revival.