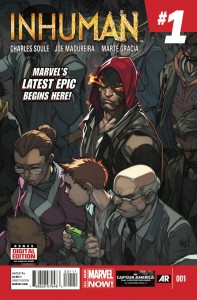 Oh, the Inhumanity! Heh, sorry, I’ve been dying to say that since Infinity ended. And now that I’ve got it out of my system I realize how truly stupid it sounds. So let’s move on from that horrible opening shall we? Perhaps review a comic together?

Today, we hold in our grubby mits Inhuman #1, the new series bursting forth from the loins of Inhumanity and Marvel’s new vehicle to push another burgeoning race of superbeings upon their readership. Remember all the new “lights” pinging Cerebro with new mutants after Avengers vs. X-Men? Kinda the same thing here. At the end of Infinity, Black Bolt blew up the city of Attilan with Thanos aboard and simultaneously released a giant cloud of Terrigen mist, the chemical agent responsible for transforming Inhumans into superheroes. This cloud is spreading all over the world and activating latent Inhumans, nearly all of which had no idea they were carrying the enhanced DNA. Thus begins Inhuman!

The book opens with a scene that’s already been played out in several other series already. A regular guy walking around town is suddenly surrounded by strange mists and then spontaneously cocoons himself in a gooey shell. We’re introduced to a new Inhuman here, Lash, who appears to be the self appointed jury for the worthiness of any new Inhuman unlucky enough to hatch in his presence. The poor guy he appeared to initiate into Inhuman existence emerges from his cocoon and is immediately vaporized. Harsh! Meanwhile, Medusa is still searching for her husband, son and answers to the entire debacle of Attilan when she discovers Eldrac, The Door, is finally found. She asks him to transport her to Black Bolt, to where she can help the Inhumans in this difficult time. From here we segway to anther scene of everyday life with a new player, Dante, an aspiring drummer working to care for his pregnant sister Gabriella and his bedridden mother. Once again, the Terrigen mists invade and both Dante and his mother cocoon up. Somehow, Lash is instantly on the scene to await their birth and probably zap them into atoms too. Sadly, Dante’s mother didn’t survive the Terrigen transformation, dying in the cocoon but Danta’s gestation is incredibly fast and he bursts forth to confront Lash before he can be disintegrated. Dante’s powers appear to be a somewhat Human Torch-like (minus the Flame On! requirement) and he battles Lash until Medusa arrives on the scene. Apparently Eldrac felt this is how she can best serve the Inhuman race. She runs Lash off and then sets up the series by alluding to an impending Inhuman war where everyone will have to choose a side.

Even as a #1 issue, I still feel this one didn’t need to go through the introduction phase as much as it did. We’ve already had plenty of time to get acquainted with the current state of the Inhuman community through Infinity and Inhumanity and the other series these events have crossed over to. Soule’s setup here was fine, and if you haven’t picked up a Marvel book in the past six months then it’s a necessary introduction, but otherwise it felt like a rehash for much of the book. Lash and Dante’s stories shine even brighter in comparison to the rest of the book as a result. We still don’t know much about either of them, and at first glance they are a bit stereotypical, but I’m interested to know more about Lash’s motivations and his community of Inhumans. This also appears to be a perfect opportunity for Medusa to become more than a supporting character and subplot for Black Bolt and to be featured as a strong female hero. Marvel could always use more of that in their line-up, complimenting Captain Marvel and Black Widow in their own solid titles.

As for the art. Oh man, where do I start. I think I’ve reread the book three times already just to fully absorb Joe Mad’s incredible pencils. Everyone knows this guy is amazing, he’s been a superstar forever. But even if he’ll never do a monthly book again, the fact he came back from designing his own successful video games to show he’s still in top form in comics is nothing short of amazing. His quick stints on Avenging Spider-Man and Savage Wolverine appear to be perfect warm-ups for his work here on Inhuman. His Medusa is sexy, stoic and even mysterious in nearly every panel. And the hair is fabulous too! Every character is crafted with care, even if I get a super strong Akuma vibe from Lash. But you know what, Akuma is a bad ass, so it’s just fine with me. I especially love that Marvel is continuing to color over his raw pencils rather than ink them first. I’m sure it’s partly to help him keep the pace over the course of his issues since he works slower than most artists, but it also adds so much to the visual appeal of the book. I love that I can see the craftsmanship in every panel this way. And Gracia’s colors are perfect, appearing nearly painted over the top of the masterful pencils. I have no idea how long Joe will be working on this title, but I intend to bask in every single issue.

I think that despite my inherent boredom with the Inhumans (mutants with mist!), this book could be a solid title in the long run. I think there’s still a bit of clichÃ© here that doesn’t sit quite right with me, like Lash as the mysterious omnipresent villain that somehow no one has ever heard of before, or Dante having super flamey powers (Inferno anyone?), but aside from all this Inhuman has the right parts to make an interesting superhero book. Dante needs some depth if he’s to stick around, and I’m sure we’ll be meeting a ton of new Inhumans as Medusa builds here army. I just hope she gets there before Lash finishes his morning coffee and zaps them at sunrise. In any case, Joe Mad’s art alone is well worth sticking out this run for the immediate future.

Score: 5 (out of 7) Just once, I’d like to see a beautiful Inhuman butterfly emerge from one of these cocoons. I’m sure it would be promptly incinerated or eaten by something, but I think it would be cool for a minute.