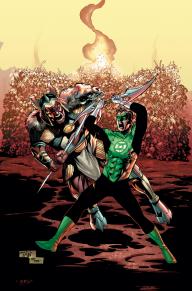 Green Lantern #30 continues with the upcoming war between the Green Lanterns and the shapeshiftingÂ Durlan. The issue begins with the crypts construction being finished on Mogo. Hal calls the corps together for an emotional farewell to all the fallen Lanterns over the last several issues, including Kyle. This shows the type of leader Hal has become over the last 10 issues of this series. Next, Hal and his most trusted Lanterns meet on a ship where there are some Durlan warriors. It is decided that a battle between Hal and one of the leaders will decide the next phase of this war. There are some great scenes before the fight where Hal buys his future opponent a beer and they have friendly conversation. The fight happens and just as it looks like all hope is lost Hal emerges victorious. Back on Mogo, the Durlan spy is finally found, but the outcome is not going to make anything easier for Hal and the Lanterns.

Robert Venditti has done a fantastic job with this story and really built up his version of the universe quite well over the last 10 issues. He has put the corps in a situation that is going to be very hard to come back from. They have lost members before, but the mistrust of the whole universe is going to be hard to recover from. Billy Tan continues to impress with the detail in each panel and the beautiful colors expected in the Green Lantern universe.

Overall, Venditti has been the perfect writer to take the corps closer to destruction then they have ever been. The story is now totally in his hands and this issue has been one of the best so far. The emotional beginning with the shocking conclusion is exactly what makes the Green Lantern Universe so fun and exciting.

Thoughts? Let me know if the comments below or on Twitter @joshraj9