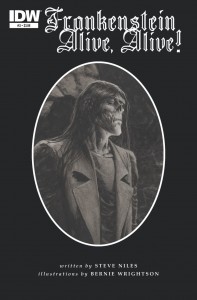 I really feel for poor Frankenstein. Over the past decade he’s had to watch vampires rise to their greatest heights of popularity ever, with blockbuster movies and hit TV shows. They even get to be sparkly and glamorous. Then we had zombies. They’re everywhere. You can’t swing a dead cat without hitting a piece of Walking Dead merch or some kind of zombie related fare. Even werewolves have hit it big, riding the coattails of vampires and popping up in pretty much every franchise they appear in from Underworld to Twilight to Vampire Diaries. So what does that leave poor ol’ Frank? All he’s had since his heyday in the 50’s has been a run of crummy books and even crappier movies. He’s so uncool you don’t even see kids dressing up as him at Halloween anymore. I still think his story is relevant, it just needs the right creators to prove he’s important too in this age of zombies and vampires.

Frankenstein Alive, Alive! is definite step in the right direction. This labor of love from Steve Niles and the legendary Bernie Wrightson is adding to the Frankenstein mythos in a way I’ve never seen before. Where most often you see Frankenstein as the object of humor or, as in Van Helsing, some kind of warrior poet, this book is attempting to truly humanize the monster and show us the pain he’s wracked with as the product of a flawed creator. So far it’s pretty great.

Issue #3 continues with the Monster (Frankenstein was the mad scientist and he’s denounced this moniker) taking refuge in the home of Dr. Ingles, along with his ailing wife Dolly. Something drastic has taken place, as Dr. Ingles is sending his entire staff packing, his only explanation being that Dolly requires his full attention for the foreseeable future. Watching from his library window he suspects the worse, as he feels it was his presence that has put Dolly into such a decline. He begins to search the house for answers when he comes upon Dr. Ingles with a young woman. She’s certain she’s seen a monster wandering the house and upon pressing the issue our good doctor promptly chloroforms her. I guess that’s one way to deal with pushy women. Frankenstein, having witnessed the entire ordeal, is now more distressed than ever and continues his search for Dolly. When he finally locates her he finds she’s already dead, and is confined in a laboratory very similar to the one he was created in. Dr. Ingles enters as he’s pondering this new development and explains that Dolly may be dead but teeters on the edge between life and death, and he’s convinced he can bring her back. If only he had more of his life giving elixir he could make it possible. And this is where the story takes a sinister turn, as Frankenstein learns the origin of the elixir and its connection to the poor young woman held captive in these same walls.

The beauty of this series lies in more than just Wrightson’s stunning pencils. Niles has expertly crafted a tale that exposes the essence of who Frankenstein could, and should, be. Whereas a lot of the other attempts at Frankenstein are character assassination or modern interpretations, this story is a direct continuation that really drives home one basic point: Despite our Monster’s appearance and nature, his internal struggle with his continued existence, guilt and shame give us a character that at his core is more human than the human beings he’s surrounded by. Dr. Ingles has no issues with murder to revive the corpse of his wife, just as the patrons of the sideshow have no compunction about pelting him with rotten veggies solely based on his appearance. He possesses more soul and compassion than any of the human counterparts in this story, and all he truly wants is for his existence on this world to end. You really feel for the guy by the end of each issue.

And yes, there is beauty in Wrightson’s pencils. So much. Every page is a masterpiece. If you’ve ever been privileged enough to read the original Wrightson Frankenstein book, you know exactly what to expect. Breathtaking panels on every page, the level of detail so minute you can pick out the bubbles and gooey bits in every flask and beaker. I’m so glad this book is being published in the unadulterated pencils with no attempt to digitally ink or color it. This book is presented in the perfect format for a sequel to the original Shelley story. I think I’ve reread each issue three or four times just to soak it all in.

I really like this series, and this issue in particular, for it’s insight into the heart of Frankenstein’s Monster and how he’s in constant battle with his nature. Also, it drives home the point of how man, in his arrogance, could create and belittle a creature that proves to have more integrity and compassion than we do. Good stuff indeed.

Score 7 (out of 7) I dressed up as Frankenstein once when I was a kid. People kept calling me Frankie and it made me feel like that dope from the Adams Family. Pretty sure the vampires got more candy than me too. Humph.