The last we saw Matt Murdock things didn’t look too well for him. Matt and the Shroud (Max Coleridge) stormed the Owl’s mansion. Leland Owlsey promised the Shroud that he would tell him where his wife is, resulting in the Shroud seemingly betraying Daredevil! This issue picks up where the last issue left off, with Matt falling into a pit of fire. Unarmed, how 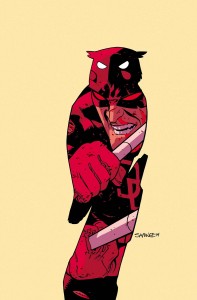 can our hero escape this deathtrap? There is a scene near the end with Max is written beautifully. You really feel his pain and it becomes clearer that this guy really isn’t a villain.

The flow of this issue is fantastic, it really only features four characters (Matt, Max, Leland, and Kirsten) but they all get enough screen time and the issue goes by rather quickly. The climactic battle at the end was great because we have the Owl vs. Daredevil vs. the Shroud and not everyone gets what they want. And the next arc is called the strange death of Foggy Nelson! But wait, didn’t we just see him last issue?

Waid and Samnee make an incredible team; they really find a nice balance where the strong art matches the strong writing. Samnee’s art is such a joy to look at, the colors and pencils work so well together. I’m really glad he has been with this book for as long as he has, it doesn’t make Daredevil’s world seem overly dark and gritty like Alex Maleev and Michael Lark on their big Daredevil runs. And that is a nice change of pace, especially with the move out west to San Francisco. There are so many good things about this issue (and the series as a whole) that I could go on forever but I’ll stop here.

Rating: 7 (out of 7) – This was another spectacular issue from one of my favorite creative teams. Can’t wait to see where this series goes next.