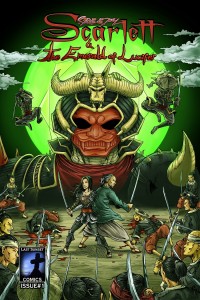 Creepy Scarlett takes place in 1919 where a woman is living in a church where there is a knock on the door. The woman answers and the man tells her he is looking for the pastor. He has traveled for many years to gibe him one of several objects that hold great power. This particular object is the Emerald of Lucifer, which is said to have fallen off of Lucifer’s crown when he was kicked out of Heaven. The woman informs the man that the pastor has been dead for years, so his journey was wasted, at this point the man travels to the cemetery near by. It is here that a spirit contacts him and tells him that the Emerald must never leave the cemetery and he must train the woman to protect it. He begins training the woman and tells her that he found the emerald in a mine when he was young and was gained by Warlord as his apprentice. Warlord began losing battles in war and decided to use the Emerald to his advantage and began winning. Before the last battle the man stole the Emerald and has been on the run ever since with Warlord not far behind. After training, Warlord appears and they battle him and his army defeating them, the man dies but tells the woman that she must protect the Emerald and that other people will come with object for her to protect as well. After it is revealed that the woman has been dead for years and is the Creepy Scarlett tasked with protecting these items.

Creepy Scarlett #1 is everything a reader would look for in a first issue to a series. This issue has plenty of twists, action, and humor during the course of one issue making it one enjoyable read from start to finish. The beginning there is a Yoda and Luke vibe with the training between the man and Creepy Scarlett, which helped establish the characters and made them likable early on. The issue did just enough to establish each of the characters while leaving the reader wanting to know more about how they got to where they are. There will be backstories to explore which will make this universe even more interesting and exciting. The detail in the art makes this book a visual masterpiece with color that allow the reader to immerse themselves into the world the creative team has made. Its not often that a story and its art are so well done that the readers can get lost in the story.

Overall, Creepy Scarlett #1 is a rich story full of beautiful art that could be the start of an exciting and fun ride that hopefully will continue for some time. The groundwork set up in the first issue is setting up for an exciting future for this new series.

Thoughts ? Let me know in the comments below or on Twitter @joshraj9