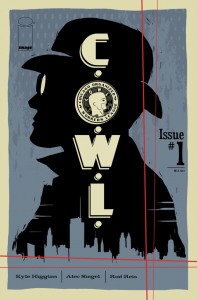 Sometimes you read a book and it begins to remind you of many things you’ve read in the past. If it does those things well and freshens them up a bit, it’s a beautiful thing. If it doesn’t, well it ends up in the quarter bin. But if it can take the ideas from the past and mesh them into a quality cohesive whole while still showing you something fresh and interesting, then you’ve got something special. After reading C.O.W.L. #1, this appears to be exactly the case. It takes some classic elements from classic comics and combines them into a wonderful and original final product.

C.O.W.L. (Chicago Organized Workers League) takes on the concept of a real world superteam finding their purpose after all the big bad guys are gone. In the tradition of Watchmen, we have a group of heroes working together to protect their city. The book opens in dramatic style, dropping us right into the battle without any introduction or prologue. The team is pursuing Skylancer, believed to be the last of the Chicago Six and he’s set on wreaking as much havoc as possible before they can take him down. After his defeat we flash forward to the present, where the Grey Raven oversees C.O.W.L. operations in a time where the city is hoping for peace without the Chicago Six to worry about. However, things can’t stay calm for long as Skylancers old weapons are popping up around the city and starting to cause major issues for our team. Add to that, the back office political intrigue that comes with positions of power and the team dynamics of superheroes and you’ve got a nicely complex, very fleshed out feeling story in just one issue.

There’s a lot to like about this book. The story takes no time getting straight to the action and intrigue of the world Higgins and Siegel have created. There’s no long winded setup or hand holding here, no inserts explaining who every character is as we meet them. You get action, smart characters and brisk pacing right off the bat which I find absolutely refreshing. The main players all feel like they have depth and are mysterious before you’ve even gotten to know them. I get impressions from a lot of other great titles when I read this book. Like the news conference sequence, very reminiscent of the great pages from The Dark Knight Returns. The team composition and interaction feels a lot like Watchmen. The art style and realistic take on superheroes and the world they live in reminds me a bit of Bendis’s Moon Knight. These are all really great things, and none of them are done in a way that imitates any of the above, it’s just a hint of those previous works rendered in its own style.

The art is outstanding. Reis’s work is stylish and vibrant. His style on this book is reminiscent of Alex Maleev, with maybe some Steve Pugh and Stjepan Sejic mixed in. And that’s totally a good thing for those following along at home. The digitally painted look has great texture and his use of light and dark really showcases the important aspects of every panel. My only minor gripe is with the lettering. I like the fonts in use but there’s something weird about the word bubbles and how the type looks on top of the art. It looks as if the text was literally Photoshopped over the top of each panel instead of feeling like they’re part of the page. I know this is how it’s done in real life but it looks strange here. It’s hard to describe, and perhaps it’s just my preview copy, but it was slightly distracting. But, as I say, it’s a very minor issue and doesn’t detract from the overall great quality of this book whatsoever.

Even if this concept has been done before, I like the direction and unique touches the creative team is bringing to this book. Everything feels gritty and real right off the bat, which is no small feat for what is, at its core, a superhero book. For an opening issue it’s already established a large cast of characters, a deep backstory and enough intrigue and conflict to last a couple of arcs. I’m very excited to read future issues of this book, if they’re all as good as this first issue then we have a lot to look forward to.

Score: 6 (out of 7) In this issue, Radia uses her powers to pop the head off a bad guy from 50 feet away while completely blind. I’d probably avoid using bad pick-up lines on her at the bar.