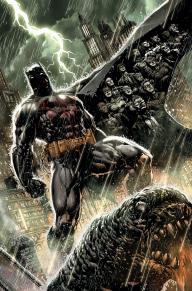 Batman Eternal #1 is the start of the year long weekly Batman comic series. The “first” issue starts off with what is the end of the story, Bruce is tied to the bat signal and Gotham is burning in the background. It then cuts to a new police officer from Detroit arriving to Gotham for a new job and he is supposed to meet Jim Gordon, who is actually stuck in a shootout. The new guy meets some of the other officers at the station when Gordon calls for back up. Pyg is escaping and Batman is on his tail while Gordon follows another man into the subway. Two trains are headed right for each other right near Gordon and the man. Gordon tells the man to drop his weapon but fires a shot when he won’t listen, the bullet hits the power switch causing the trains to collide just as Batman saves Gordon. Upon review it is found the man never had the gun and Gordon hallucinated it and by hitting the switched caused the trains to collide. The GCPD then told the new guy to arrest Gordon.

The first page of this issue showed that this team of writers plans to bring Batman and Gotham to the brink of destruction. This is going to be a long ride but that first page should have readers very excited. The team also established that while this is a Batman series, he won’t be the main focus, plenty of characters will get time in the spot light and that was apparent in this first issue. The art had a lot of detail and there are times I found myself just admiring the panels, it will be interesting to see how that will be going forward with this being a weekly series.

Overall, Batman Eternal #1 was an exciting start to the first weekly series of the New 52. It will take some time getting used to the extra focus on other characters as well as the much slower pace in the story. The first page of this issue set up what could be an exciting end to the series, the road there should be interesting, but rather slow.