VILLAINS MOUTH HAS ARRIVED IN THE DC UNIVERSE! 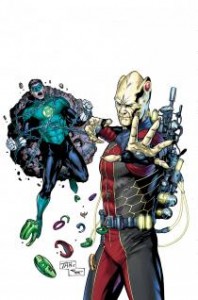 This issue has the Geoff Johns feel to it. We get to see the origin of Relic and it is more of a tale then a story. This issue does two things, which are both done very well, it introduces the reader to the new villain and also sets up the upcoming story in the Green Lantern Universe. The last few issues we have learned that Relic hates the lanterns, in this issue we finally find out why.

Villains Month seemed to happen at the perfect moment for the Green Lantern titles, this allowed them to have the point of view from Relic and allow the readers to learn of his “tragic” fate. Seeing the universe he came from end with the light dying, while the current light in our universe is fading, is a cause for concern. The issue is full of beautiful art and colors that Green Lantern fans have come to expect with these titles over the years.

Overall, issue #23.1 went down the right path of exploring a new villain while also setting up the next major story in the Green Lantern Universe. The readers are able to understand what drives this lantern hater, while creating more concern for the events to come. 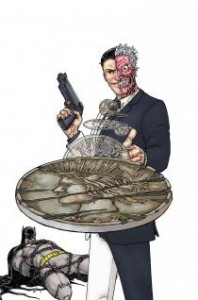 Gotham is being overrun with villains and Batman is “dead” will it fall into farther chaos or will Gotham’s White Knight save the day? That all depends on if Harvey Dent is in charge or Two Face.

With The Dark Knight still only a few years old, everyone knows the story of two face. The decision not to explore this origin and instead tie more to the Forever Evil story was a good decision by the writing team. The reader would have to have an understanding with Forever Evil to understand what is going on in Gotham (I suggest reading it).

Two face is always an interesting character because the outcome will always be one of two ways. The team did a good job with him and his split personalities. The art was also spot on. When we see him making the Harvey decision we get a view of that face, and vice versa. It was also interesting in getting a few flashbacks every other panel as he was walking into the courthouse.

Overall, Batman & Robin #23.1 did a good job on a more well known character telling a story that was interesting while having a beginning, middle and end. Seeing Two Face in a situation where Batman is nowhere to be found was exciting and really perfect for his character. 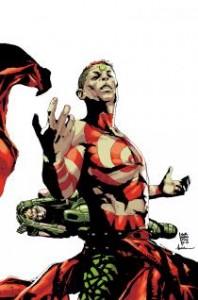 Andrea Sorrentino has continued to nail the art for this book week after week. She really knows how to make the art really work well for the story. It is amazing to think how far this book has come since Lemire took over.

Count Vertigo takes center stage in this issue, and much like Green Lantern we get an interesting back story while also setting up the story for issue #24. The reader learn about just how powerful the Count is while also feeling some sympathy for him. The life he had growing up is really what drove him to such hated. It was interesting seeing how he went to a school that basically taught him how to use his powers to become more stronger and have more control.

Overall, Green Arrow #23.1 does a good job and continuing the Count Vertigo story while also allowing the reader to understand the history of the character. The art continues to impress and really make the story that much better.