The Changing Face of Gotham

With news that a Batman V Superman: Dawn of Justice preview will be attached to the fall finale of Gotham, it brings a new set of eyes to perhaps the most divisive comic book show on TV. A show that I will admit wasn’t without it’s fair share of problems in season one, and I don’t blame anyone for jumping off the ship. Instead of sitting here telling you that season two is a better show, I wanted to examine the ways that Gotham has changed and improved during it’s sophomoric season.

First check out the video above, it gives a 7 minute recap of season one of Gotham. You will have most of what you’ll need to skip it.

The trailer does a smart job of skipping over the absolute low-point of the series to date, the whole Fish Mooney on an island subplot, which was used as nothing more to pad time for the character as it had no real payoff!

Now that you have the background, let’s look at ways that Gotham has become a sharper show.

First, the tone, one of the its critics’ biggest problem with the show, hasn’t been “changed” but the show has become more confident in its vision. If you go in with expectations of this show being a gritty crime drama or a campy comic book show, you’ll come away disappointed from two vantage points. Gotham is… well Gotham. The show is a weird mash-up of camp and grit, I like to refer to it as the missing link between Burton’s Batman and Schumacher‘s Batman Forever. 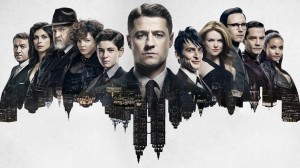 Second, the set-up of the show. The first season of the show was more your typical police procedural with a backdrop of serialization (more on that in a second), but the second season ditches that format entirely. It goes straight-up for a long-form story. Built into the first-half of season 2 are many mini-arcs, but they all tie back into the main arc of the show so far and that all looks to come to a head this Monday on the finale. 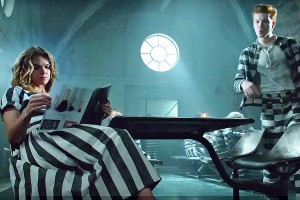 Barbara Keen has been one of the great rehabbed characters during season 2.

With the switch the show has also been able to stretch it’s legs and has done well on putting its own stamp on the Bat-universe. One of the problems with season one (or a prequel series in general) is that many characters have “plot armor” in that they can’t die because they have to exist in Batman’s continuity. But near the end of season one, the show realized it could (and for survival would have to) play with expectations. It’s how the underdeveloped Barbara Keen went from Gordon’s ex-wife in the comics to an Arkham inmates. It’s how the show was brave enough to introduce someone like Fish Mooney, then Theo Galavan and a host of other original characters. And it’s why it played with fans’ expectations/thoughts about one of Gotham’s more infamous casting decisions, but I won’t spoil it. Just know because your name is from the comics that doesn’t mean you know the character and their eventual course.

Now going back to the change of format and characters’ fates, one of the smartest changes that have come about with this is that characters’ stories and paths don’t need to intersect every week. There were scenes in season one that stretched even the show’s earliest fans’ believability. Like early in season one when Gordon comes to Wayne Manor seeking Bruce’s help with a case… like why does Gordon need to visit a young boy to help with a case? Other than needing a reason for Gordon and Wayne to interact beyond his parents’ death. Even in the twilight of season one, you had things like Selina and Fish teaming up with no real connection between the two, other than Selina needed to be somewhere! 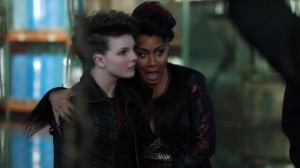 One of season one’s odd pairings, Fish Mooney and Catwoman.

Season 2 has been much better at keeping characters in their own little bubble and crossing paths when the story would call for it in a naturally manner… for the most part. There’s one crossing that seems a bit fixed, but the fall-out for that has been a ton of fun to watch. It also keeps certain characters restricted to certain stories like Selina mostly interacts with Bruce/Alfred’s subplot and Barbara is mostly seen when it comes to Jim and Leslie. Makes for a much better viewing experience that doesn’t test the intelligence of the audience.

Speaking of treating the audience with respect, one of the biggest complaints of the first season was how unsubtle the entire series was about dropping Batman references. Edward told riddles and had a mug with a single question mark, Selina was nicknamed “Cat” and was always seen perched on a building or in a tree. Everyone called Oswald “Penguin” and thanks to an episode one injury, he also waddled when he walked. Some of that stuff still exists (you can’t get rid of character traits so easily), but the show has done a much better job of not smacking you over the head with it.

Along the same line, the show has slowed down its introduction of some of Batman’s characters (heroes and villains alike). Season one saw the introduction of The Riddler, The Penguin, Catwoman, a possible Joker, Harvey Dent/Two-Face, Leslie Thompkins, Poison Ivy, The Scarecrow and I assume many more. Granted with introducing so many characters, there aren’t a ton of major hitters left, but season two has been slower to roll em out and when they do give them more time to breath and be characters. See the Firefly arc in season 2.

Now not all changes made were for the better. One change that I’ve not been a fan of is getting rid of the mob subplot that ran throughout all of season one. For a multitude of reason. The first being that it had some of the best actors on the show. Those scenes were always filled with such tension. Secondly, it did more to flesh out the world of Gotham and the corruption that runs throughout the city (even in the days of Batman) and finally,it was the easiest connecting tissue of the major players. I do hope it returns in the back half of the season, there’s enough of a power vacuum for it to be a thrilling arc.

Hopefully this has been helpful for some. If nothing else, Gotham season 2 is worth a look, and really most of us will be checking out whatever Batman V Superman footage online afterwards!