Uncharted (Sony Pictures) – Uncharted is one of those movies that has been on- and off- again since at least 2010. It has changed directors, directions and actors since then, which doesn’t usually build confidence in a film. But I do believe that Sony wants to get this one right since it is a key brand for them in gaming and only good things can come from expanding its appeal to a mainstream audience via cinema. Right now, the film is set to star Tom Holland as a young Nathan Drake, and that has potential after Uncharted 4. 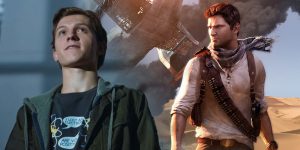 Metal Gear Solid  (Sony Pictures) – Another movie that has been long in the oven, but unlike Uncharted, I feel like Metal Gear is a brand that is much harder to translate to the big screen. The game series has always been known for just being dense. Using the medium to tell an intricate story with solid gameplay focused on stealth and brain. A lot of stuff that either makes a movie really drag or move way too quickly. Getting the writer behind Jurassic World seems to point in one direction so we’ll find out.

Monster Hunter (Constantin Film) – Monster Hunter is just making treks in the West, and it’s no surprise that someone gobbled up the rights for the movie right away. Then you realize that it is being worked on by Paul W.S Anderson, the man responsible for the Resident Evil series of movies. Now the fact that there have been 6 movies and franchise has grossed over a billion dollars makes it easy to see why Capcom would be willing to go back to the well with Anderson. And he has shown to be quite capable with large-scale setpieces and CG, but it may leave fans a bit cold on the final product.