In the wake of CRISIS ON INFINITE EARTHS, the heroes of the DC Universe must find a new purpose and direction in the battle for justice! When G. Gordon Godfrey arrives on behalf of Darkseid to create a hate campaign that outlaws super-heroic activities, the world’s greatest find themselves fighting the very people they swore to protect! 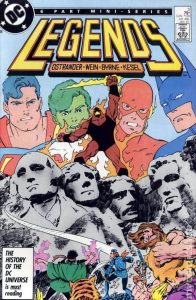 DC’s Legends was a book I picked as I was scrolling through the DC Universe app, the cover of the first issue just seemed so inviting and I had never heard of the series so had no real expectations of it.

What I got was 6-issues that form one of the finest crossover events from DC Comics that I’ve ever read and with a message that seems all the more relevant in 2019 than it did in 1986.

The crux of the story focuses on G. Gordon Godfrey using the power of the media and people’s fear to drive a wedge between the world of man and the superheroes who have sworn to protect them. It’s hard not to draw parallels to our current day political climate and the fight between that and the media. It shows how powerful a force it can be especially when weaponized.

In addition to Godfrey’s war of words, the book also features quite the mixture of DC characters including the formation of The Suicide Squad, Captain Marvel dealing with the danger that his powers bring, the emergence of Wonder Woman and so much more. The book is jam packed with heroes, but never feels rudderless or cluttered.

That isn’t to say the story is flawless. While it flows well enough on its own, I guess there were a handful of tie-in issues so there are a few times within the 6 issues where the series will recap itself. Which may have worked when dropped monthly, but is a bit jarring when reading as a collected series to see a multi-page recap of pages you just read.

The art is top-notch as well. Personally, one of my favorite designs for a lot of these characters including Darkseid and Wonder Woman. It’s clean, vibrant and full of life. One tool the book utilizes to great effect is filling in empty background with color. A lot of times, folks will just kind of leave it as is or use a singular color, but a lot of frames are bathe in warm hues like pink or yellow which really helps to push the characters to the foreground while eliciting some sort of emotional response from you without knowing it. 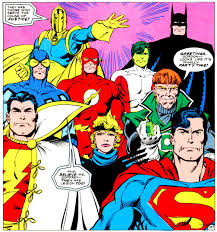 The collection only contains the 6 books that make-up the “Legends” event and it felt like a complete package. I didn’t feel like was missing out on any important beats or development without some of the tie-in titles, but mileage may vary.