When Tai inherits his grandmother’s jade ring, he soon finds out it’s more than it appears. Suddenly he’s being inducted into a group of space cops known as the Green Lanterns, his neighborhood is being overrun by some racist bullies, and every time he puts pen to paper, he’s forced to confront that he might not be creative enough or strong enough to uphold his ba’s legacy.

Now Tai must decide what kind of hero he wants to be: will he learn to soar above his insecurities or will the past keep him grounded? 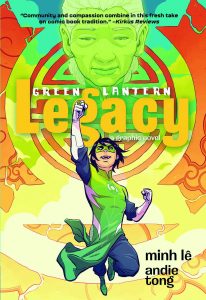 The Green Lantern mythos is one of the most versatile and dynamic concepts in all of comics. Not only does it allow you the chance to introduce a near infinite number of characters and worlds, it also allows you to tackle the many sides of any emotion. With Hal Jordan, DC explored what it meant to be be fearless. With Jessica Cruz, the world got to see how brave it is sometimes to just leave your home on a daily basis. Now comes the latest member of the Green Lantern Corps with Tai Pham, as his fears to overcome are something very human… living up to a legacy.

When Green Lantern: Legacy begins we are introduced to the Pham family, which includes 13-year old, Tai, his college-aged sisters, mom and dad and his bà, Kim Tran, who we come to learn was a Green Lantern in life. Before she passes, her ring chooses Tai as its successor and it isn’t long before he is summoned to action. One thing, I found surprisingly refreshing in this early Lantern origin tale is there isn’t a moment of disbelief or distrust in Tai. He doesn’t need to be convinced of the ring’s potential or its power. Instead, working on improving himself to wield as intended.

Along his journey, he is aided by veteran Green Lantern, John Stewart, Queen Iolande and the spirit of his bà. They prove to be helpful mentors who don’t abuse or breakdown the young boy in order to make him realize his true potential. Once again offering a fresh and clear take on the Lantern mythos. More impressively than that though, Tai has two best friends, Tommy and Serena, and after he becomes a Lantern, he doesn’t lie to them or hide from them instead entrusting them with his secret identity. A simple, but sweet moment among friends.

Tai has a supporting family, trusting friends and a super-powered ring, but there’s still a weight that burdens him. Actually two. The first is his young age, at the age of 13, Tai is one of, if not the, youngest member of the Green Lantern Corps. Something that doesn’t elude the other members of the Corps. Which comes with its own headache as a teenager, who feels like everyone is treating him as a child even with the universe’s greatest weapon on his hand. 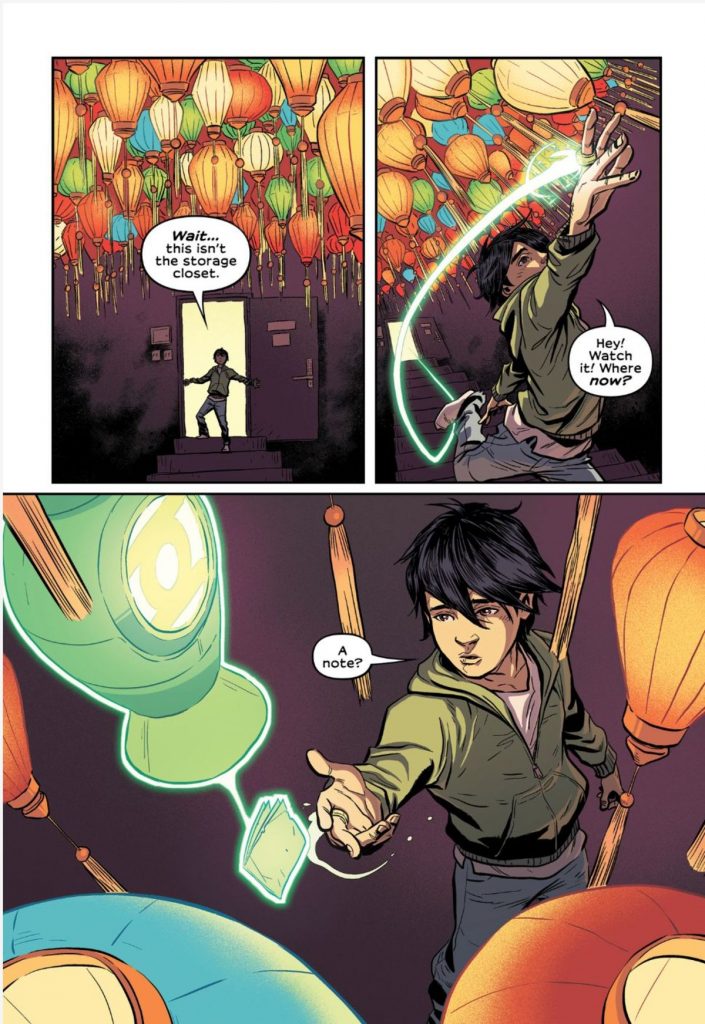 The second is a bit more personal, for the character, but also the writer and to a lesser extent myself as well. The legacy of a grandmother that Tai knew and loved, but also realized he didn’t know. It’s one of those things that gets lost from generation to generation, we don’t always get to hear stories of our parents and grandparents when they were younger. The trials and tribulations that they went through to get to where they were, and help make it a better place for a newer generation. It’s a story beat that resonated with me, as someone, who learns new stuff about his grandparents even in my 30s. But, I don’t believe I’ll ever learn that my grandparents were literal superheroes. And that I inherit the lineage of their superheroics at such a young and tender age.

While it is an important story beat, and one that resonates with me, I feel like the book never puts the weight behind it for the big heroic moment that it gets later in the book. It’s a great moment, and it lands, but more for the spectacle of the image than the emotion behind it.

Finally, the image of the book. I wanted to talk about it throughout the review, but felt it needed to be highlighted on its own. The book has such a fantastic style. The best thing for me is the usage of color-grading to highlight certain elements of the books, The cooler red and yellow scheme of Tai’s premonition early on in the book, the more nature-oriented green hues of Tai’s training sessions before they blast off to space or even the simple vibrant backgrounds when Tai and Serena engage in an intense game of ping-pong. Each helps to really elevate their scene and make them feel distinct from other parts of the book. And tell a story within a story, such as the warmer hues returning whenever the book tells Mrs. Tran’s backstory. Some of the final pages also have truly amazing set-pieces, but I won’t spoil that here.

Review 7 (Out of 7) – If you haven’t figured it out by now, Green Lantern: Legacy comes highly highly recommended. It’s a fun and fresh take on the Green Lantern mythos and has a ton of potential to continue to grow.