It gets old saying it, but Beware The Batman is a different type of Batman show and nothing establishes that more than this episode, which introduces Batman’s main foe for the series’ duration, Anarky. Anarky is set-up not only as Batman’s major foil but his opposite in this episode. Starting from their basic appearance, Anarky is clad in all white to counter Bat’s completely black outfit. A marked change from his comic half.

He also represents organized chaos. To compare him to The Joker from The Dark Knight, he knows exactly what he is doing and why he is doing it. He even attempts to plan for Batman, but not all plans go as intended. 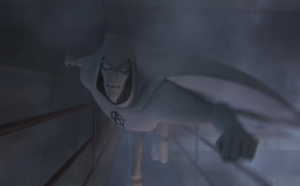 Speaking of plans, Tatsu spends most of the episode being tested by Bruce (hence the title of the episode) as he continues to evaluate if there is any value in her being his actual partner. Most of these are testing her mental acumen and has her chasing bread crumbs through the finale. It is a slow burn, but I guess the producers wanted fans to believe she could hang with Batman since a non-traditional sidekick.

In the final plot (and oddly the main one) of the episode, two rejected artists are used as willing pawns by Anarky. Throughout the episode, Junkyard and Doodlebug are upgraded with various tech and are defeated by Batman with some assistance from Alfred and the Batmobile. They really serve little purpose other than to act as proxies for Anarky so Batman gets something to beat up.

Three episodes in and Beware the Batman is proving to be a difficult show to understand. It knows what it wants to be. It knows its major players. But it seems hellbent on taking the longest possible route to get there.