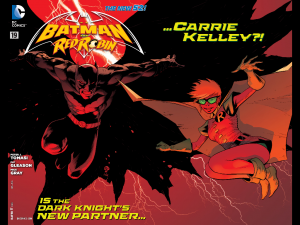 This was a very strong issue and did a great job showing Batman dealing with the death of his son, as well as the continued tension in the bat family following Death of the Family. This was an emotional ride for Batman, while not as emotional as the previous issue Batman & Robin 18 (reviewed by Earl) it does show Batman continuing on the different stages of grief.

I felt the whole Carrie Kelley plot in this issue felt out of place, I could have done without it all together. I am in the boat of having Harper Row as the next Robin, but would love to have Damian Wayne back. 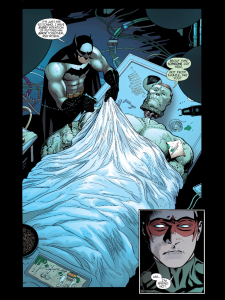 We really get to see Alfred shine in this issue. First when Bruce keeps referring to Damian in the present and Alfred corrects him, and then he keeps looking out for Batman when he leaves the Gotham area and calls Red Robin to find him and assist. In all reality Alfred was the “sidekick” in this issue. Batman is really feeling the pain of losing his son and will do anything to have him around again. This leads him to working “overtime” and leaving Gotham to go to the Arctic North.

Batman arrives and confronts Frankenstein, and Batman is doing something we would never expect from him. He is thinking more with his heart then his brain. He is willing to go to extremes of trying to “recreate” robin as Frankenstein was years ago. It is shocking to see Bruce go to such extremes, even for someone he cares about. He knows full well the risks involved in doing this. This is when Red Robin comes in to “save” Batman. Batman is well into trying to determine the reanimation when Red Robin arrives and when he tries to talk Batman out of it, Batman won’t listen. Red Robin has to explode the mansion to cause Batman to stop what he is doing and finally knock some sense into him and allow him to see that he is going to far.

Positives:
+ Alfred doing what he does best, looking out for Batman and being his true “sidekick”.
+ Bruce’s emotional ride, we get to see him doing some very unBatman like things (showing more emotion, and thinking with his heart).
+ Frankenstein was shocking and a fun experience, plus creative.

Negatives:
– Red Robin could have been used a bit more.
– Carrie Kelley seemed out of place.
– Frankenstein by using him for this makes me wonder if there is no Lazarus Pits meaning no bringing Damian back.

Overall:
This is a good issue that builds on several stories that have been on going and allowing us to see a vulnerable side of Batman yet again. This while not as emotional as issue #18 is, it still delivers emotions and a great story.

What do you think? Let me know in the comments below or on Twitter (@joshraj9).