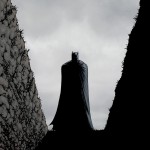 Comics have trained us well when it comes to death of major characters. It happens, and sooner or later it will likely un-happen. While the other Bat-books in “Requiem” have dealt with the fall-out of a major character’s death, Batman, Inc 9 seems to have a much different and interesting focus.

Batman, Inc does feature the somber, sad and lonely tone of life post-death of a loved one, but it also needs to continue the story so it is full of action and consequences, but more importantly this seems like an issue that is focused on gearing up the audience for war.

It’s not a new strategy. A strong leader uses the death of one of their own as a rallying call to motivate others into action. It’s essentially the strategy Marvel and Joss Whedon used to get the Avengers together in the movie. I just found it interesting to see in the pages of Batman, Inc.

Here’s the thing, and I know not everyone is a fan of Morrison’s story-telling, but he weaves a tale with many angles and times without the audience ever really getting lost in the shuffle. This comic tells the story of the Batman at Wayne Tower, the funeral at Wayne Manor, the continuing battle between Batman Inc andÂ Leviathan, and the personal saga and grief of both Talia and Bruce Wayne without missing a beat. It packs a lot into a single issue, but makes it seem easy.

Getting back to the war aspect though. This comic, at the end of the day, does deal with the struggle of Batman, Inc and it does try to get the focus back on other characters near the end. The one I found most interesting was Squire, who also lost a partner in crime during this arc, and the difference, but similarities in which it effects her personally and while in costume. I am curious to see where she ends up by the end of the arc. Actually, curious to see how this whole thing shakes up. 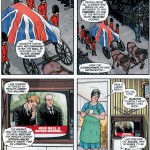 The art in Batman, Inc has always been a mixed bag for me. While it does a great job of showcasing action and more impactful moments, the faces have always left a bit to be desired. They come off a bit rounder than most artists and not as emotional. Sometimes it works, like when see a battered Bruce, his scars and discoloring pop, but most of the time it just leaves me wanting something smoother and cleaner.

That said, there is one amazing panel that makes great use of the facial features and the backdrop of the page, and it comes during a very heated moment between Bruce and Alfred, which I wouldn’t dare spoil for you!

Recommendation; Buy It- Grant Morrison’s run on Batman continues to shine. He has a firm idea of the characters and their arcs. It helps that this issue showcases him as a master of his craft, who is able to weave so many threads effortlessly and make you want to see each one play out.