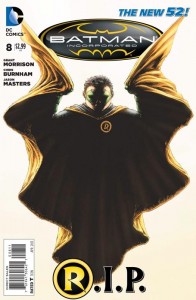 Have your parents ever told you, “I’ve bought you into this world, I can damn sure take you out of it!” ? While I hope no parent would ever keep their promise, I always saw it as a term of endearment as opposed to a threat. Apparently Grant Morrison saw it as a threat.

Let’s get this out of the way, there will be spoilers, if you don’t want to spoil don’t read the rest of the review until you read the issue.

This issue sees the death of Damian Wayne. the son of Bruce Wayne (Batman) and Talia Al Ghul, and most importantly a creation of Grant Morrison. Damian Wayne was introduced more than half a decade ago, and when he arrived on the scene he Â was a bit of an aggressive, spoiled andÂ psychopathicÂ brat. Over the years though, he has evolved and changed and matured as a character. What never changed was Morrison’s grasp on the character, and who he wanted him to be.

Batman Inc 8 gives us the best look at the character of Damian to date, and it makes the issue all the more sad. Damian for all his flaws as a character was always affected by theÂ tenuousÂ relationship between his parents. Stuck in a weird personality crisis between the assassin that his mother and grandfather wants him to be, and the noble hero that his father aspires to be.

Over the course of his run as Robin, Damian has tried to please them both, but when all out war is declared in Gotham, he is put in the middle of the fight between his mother and father. This issue is the culmination of that, as his father is tied up, and buried under water in a safe, and his mother is so driven by her ambition she doesn’t call off a hulking assassin, which does eventually kill her son.

While comic characters dying isn’t a NEW thing, it seems like a case where the whole ordeal was avoidable. Aside from Damian disobeying his father’s order, his mother had every chance to call off her assassin. Perhaps tell him to rough him up a bit and then bring Damian to her, but she has to see this through because she doesn’t want to appear weak. Even when her son dies, she only has momentary regret before trying to put on a brave face for her men.

The sad tale of Damian Wayne is that he got caught up in the world’s messiestÂ divorceÂ without his parents ever actually being married. His father wanted him in the family business. His mother wanted him in the family business, and neither one of them ever looked at what he wanted or what their actions were doing to him. I’m now curious to see the fallout from this episode, and ow it effects all characters.

While Damian’s death was the big thing about this issue. There were some other moments at play including Dick and Tim’s battles against Talia’s men. Batman trying to escape his fate, which of course he does, and Damian finally playing the hero. Before his untimely death, he exchanges words with Dick and admits to being his favorite partner, and for my money the Dick/Damian dynamic was the best part of the character’s introduction. It really softened him up, and allowed him to finally be himself. It also gave Dick a leading role without having to play second to Batman or equals with Tim and Jason. 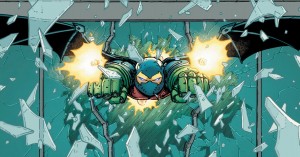 The art in this book is also rock solid for the most part. I didn’t particularly care for Dick’s face in certain scenes. It had anÂ elongatedÂ look to it. And this is just a general observation over the years, but Damian’s face is always so round at times. I get that probably trying to show that he is a kid, but it so inconsistent at times throughout the books.

On the other hand, I did love the look of his introduction with his battle armor visor. I’m not sure why he doesn’t use it more often.

Recommendation: Buy It- I’ve recommended Grant Morrison’s entire run on Batman, and for good reason, he continues to tell a compelling story and seems to know where he wants to go. This is no exception, and honestly as sad as it is to lose Damian, I’m curious to see what the future holds in the Bat-books.