The third time isn’t always the charm for The Dark Knight. The 3rd movie in the original series was Batman Forever, which began the franchise’s quick decline into campiness. The 3rd film in the Christoper Nolan’s “The Dark Knight” trilogy is often cited as the weakest film in the series. Hence, there should be a little apprehension when approaching Batman: Arkham Origins, the third game in the Batman Arkham series, but the first chronologically. Does this game fall victim to the Dark Knight curse. Let’s find out! 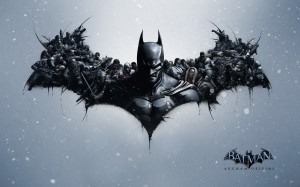 Batman Arkham Origins is a game of tempered expectations. From when it was announced, I never thought the game sought to shake up the formula too much. It wasn’t going to be developed by the original studio, and was being pushed out at the end of the generation. That said, Warner Montreal had a solid foundation to build and expand on without rattling the cage too much. In essence, that’s what we get here, a solid game that doesn’t do a ton new, but a ton well. 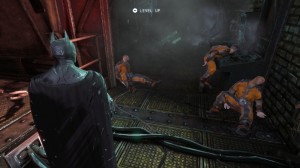 The free-flow combat makes its return in this sequel. There isn’t much added to the combat this time around sans perhaps the electric gloves you get later in the game. These actually hurts the combat because it just mows through enemies. Even those who offer variety to the combat liked padded, shielded or baton carrying foes. Granted, the game attempts to balance it by having a charge time and battery, but it really does make the combat feel lopsided when you activate it.

The other side of the combat, the predator encounters, also didn’t receive any major overhaul. At the same time, nothing was introduced that breaks the flow of them either. It also never really gets as complex as it was in the previous two games with bombs, broken statues and more.

What this game did introduce however was the new crime scene re-enactments. There were similar things in Arkham City, but this fleshes it out and evolves in nicely. I don’t know how it’s done on the other versions, but playing the Wii U version it was nice to examine the crime scene using the Wii U GamePad and trying to retrace the steps of major crimes in the city. It was nice hearing Batman work through the case in his head (and helping the player know what to look for) Â and actually backtracking through the evidence. I would have loved to see more of it in the game. 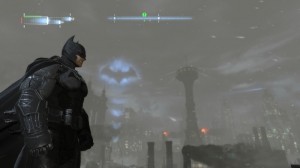 The game also sees new voices behind the cowl and the Clown Prince of Crime. Instead of Kevin Conroy and Mark Hamill, we get Roger Craig Smith and Troy Baker donning the iconic roles, and I felt it was kind of a mixed bag. Not to say that either actor were bad, but it did seem strange that they hired new actors to mostly mimic the voice work of actors who came before them. Smith at times sounds like a mix of Conroy and Christian Bale from the Nolan trilogy, and Baker appears to be giving his best Hamill impersonation, and it works well for the most part. The real highlight of the game for me though is Martin Jarvis as Alfred Pennyworth, who is just given a ton of inspiring moments to work with and really knocks them out of the park. The developers knew what they had on their hand as there is even an achievement/trophy/accomplishment for seeking out Alfred’s words of wisdom throughout the game.

On the note of the Wii U GamePad and your trips back to the Batcave, there were two more other uses in the game. The first is pretty much a throwaway but still fun. In order to enter the Batsuit chamber, you need to press your finger to the controller to confirm your identity as Bruce Wayne. Secondly, and this turned out to be pretty major, is the addition of the game’s map on the controller. After this game, I really can’t imagine doing an open world game without this feature again. It comes in especially handy for sidequests and Riddler challenges. Being able to navigate the game’s world without constantly going into a menu saves so Â much time and effort. The same with being able to activate the fast travel system from the controller and more. It really does just make the entire process more streamlined. 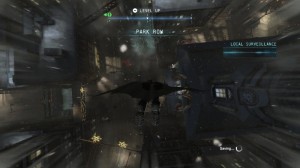 The fast travel system does become handy as the game opens up. I’m not which area is larger the one in Arkham City or Arkham Origins, but it does feel like Origins has a greater tendency to have all your objectives cris-cross the map multiple times. Not only that but the middle of the city is connected by a bridge that is rather boring to cross multiple times, and the game doesn’t offer many alternate paths to accomplishing this.

The game however does offer a more interesting selection of sidequests than City. The Riddler trophies/puzzles from previous game have been changed a bit. Instead of being random trophies now, they are “data packs” which includes extortion information on city officials. There are also Riddler Relay stations, which are like mini-puzzle areas you need to clear in order to activate fast travel in certain sectors of the city. Then there are the Riddler handlers, who are designated street thugs that you need to beat up and interrogate. It’s a meaty package that I feel is better integrated into the game than City, though I feel like they still haven’t been able to replicate the concise design of Arkham Asylum.

In addition to that, you open up “Most Wanted” sidequests that ties in various bat-villains into the game including some of the marketed assassins. Some of them offer up a nice change of pace for the adventure including Anarky’s and one very special and trippy adventure. They are a fun diversion which for the most part does tie into the main narrative. 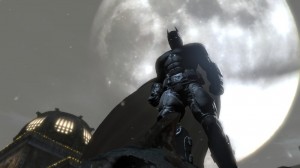 Now the main narrative is a sort of a mixed reception for me. As I noted before, I went into the game with tempered expectations, but the premise that the game was sold on… Batman battling a group of assassins all night long on Christmas Eve sounded intriguing and different. Sadly, the game never really runs with the premise instead we get a story that really does retread a lot of elements from the previous two games. I’ll give it this much, I found the story to be more coherent and connected than Arkham City.

Perhaps it is for the best that this game wasn’t a series of assassins challenges because the franchise’s biggest weakness still remains its one-on-one encounter/boss battles. The game has a ton of great ideas for boss battles, but can never execute it properly in the context of the game’s design. It also seems like a lot of the fights in this game were trying their best to replicate the feel of the Mr. Freeze fight, and not realizing what made it special.

Speaking of Mr. Freeze, this game has its share of bugs (I guess could have used Firefly as well). In my experience, I’ve noted random lock-ups at the most random times, noticeable loading time when traversing the city, glitching through the maps or part of the world and bugs that may impend your progress. I don’t know when a patch will be released, but beware it may just ruin your progress at the 11th hour.

Review 5 (Out of 7): Batman Arkham Origins builds on the solid foundation laid out by Batman: Arkham Asylum and Batman: Arkham City, while it is guilty of not doing much new with it, it was a pretty solid base to start with. It has a much more coherent story and solid voice-acting, but can’t in good conscious give it a higher score due to its technical shortcoming. Perhaps, all will be ironed out for the future, but buyer beware!