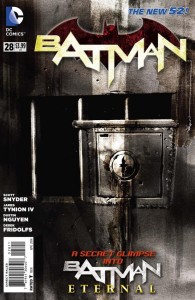 Every event in comic history claims to change the status-quo for ever. “Nothing will ever be the same!” It is Earth-shattering. Sadly, not every (or most really) comic events deliver on that. For fans though, you may not know it until you’re really vested into the story. Scott Snyder and the team at Batman decided to mix it up a bit. Instead of offering you promises, they give you a massive glance at all the changes that are going to take place in the Bat-verse during Batman Eternal with Batman 28 and they wrap it around a pretty damn good story!

Batman 28 starts at some indeterminate time in the future (aside from the reading knowing it takes place during Batman Eternal because of the cover and title of this specific issue) as we are re-introduced to Harper Roy, a young woman who has been seen throughout Scott Snyder’s run on Batman. She is approached by some cops who give her crap for being out beyond curfew, but when she drops them a secret code. She is taken to a nice underground club. Her hurdles continue until eventually we believe she has meet her match when a dark, brooding angel swoops in to save her. From here, we learn a lot about the future of the Bat-books, new sidekicks, a new crime Kingpin, and a huge event that is just outside of our knowledge base.

It makes for a fun read. As you aren’t quite clear where things are going, but the book drops enough hints to get you hooked for the ride. The reveals and new relationship dynamics are curious and really makes you want to see not only how things went South, but where events will go after this book. The book also walks a fine line with mystery without beating you over the head with being mysterious but still leaves you wanting more. 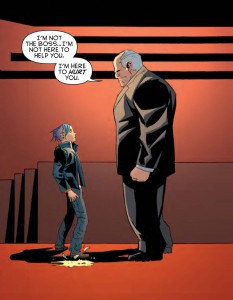 If I had one complaint about the overall story of the book, and this is extremely minor and a pet peeve, is I really wish we didn’t have to have another month of Batman: Zero Year delayed/interrupted to tell this tale. We had it back in September with Villains Month as well. I get that comics is a moving industry and Batman is a popular character, but it does seem weird to jump in and out of Zero Year more than once before it is completed.

While reading the book, I thought the art was handled by two different artists and made sure to flip back to the credits page to check, and was pleasantly surprised to find it was the same artists. The book starts off in the streets of Gotham, where its dark and dreary, and the Nguyen does a great job representing that. The characters are a bit muted in colors, there’s no real backgrounds to speak of and the art has a scratchy look and feel to it. Then Harper is taken to this secret club, and the book becomes big, bright and vibrant. Colors everywhere. Detailed backgrounds. Even Harper’s hair really pops (and is the real star between Gotham in the streets and Gotham in the club). So kudos to the entire art-team for this visual treat!

Review 7 (out of 7): Just a terrific read from start to finish. Does a job of offering a compelling standalone story while really dangling so many carrots you will want to check out Batman Eternal. So bring it on!Â