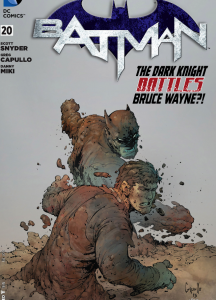 It is sometimes hard to care about issues of comics, especially between two major story arcs. We had Death of the Family, and with Year Zero next month, I’m sure some of these issues will be forgotten. This issue picks up where issue 19 left off between Bruce and Clayface. Clayface always seemed like an odd character for me one that I didn’t really consider a threat to Batman. This was a nice new take on the character. I felt it worked well giving him a short story while also kind of reinventing him. The art from Capullo always makes these stories all the more interesting, and again he doesn’t disappoint.

We get an interesting battle with Clayface going against Bruce in Wayne Enterprises and he can’t become Batman without giving up his identity. Clayface mentions he is attacking Bruce to draw out batman, but we don’t really understand why. That is just something short stories suffer from, getting a better backstory/details. After Bruce is “defeated” he ends up in a trash compactor, much like in A New Hope, with Fox. This is a bunch of failed R&D equipment that gets destroyed and incinerated. Fox doesn’t know Bruce is Batman, but Bruce puts on an “expensive” new bat suit that is at least 20 years from being available. (This suit was a great easter egg and an fun moment.)

We eventually get to a show down between Batman and Clayface. Batman informed police that it was Clayface and not Bruce Wayne causing the destruction. As they fight Batman tries all of his usual methods to take down Clayface which do not work. With help from Fox Batman is able to imprison Clayface to save the day. The last couple of pages were again touching dealing with the death of Damian. Seeing Alfred comfort Bruce in his moment of need was perfect. I have liked how Alfred was handled in this issue, while not as great as he was in Batman & Robin 19, it is still nice seeing him get some great moments.

Negatives:
– Why was Clayface being Bruce.

Overall, this is an issue that will probably be lost between the two major events of Death of the Family and Year Zero. I still think it worked well and enjoyed the story that was told. This is an issue to BUY!

What did you like/dislike about the issue? Let me know below or on twitter (@joshraj9).