I just want to preface this by saying I really do love comic books.

While watching Six Forgotten Warriors for Flashback Saturday morning, I got to see several team-ups in the 6 episodes including the cartoon’s version of the Sinister Six and of course the titular Six Forgotten Warriors. It wasn’t until I went to get some pictures for the article that I realized just how ridiculous groups of heroes and villains actually look. Yeah, I know in practice most comic book costumes aren’t practical but you kind of ignore it when its only one or two characters, but just look at these.

Now I can’t be completely unbiase here, but it seems like the DC characters don’t look as bad in a group shot? Again, it could just be personal taste.

Its hard to find a proper image, but it seems like the Legion of Doom would be an odd group if they ever stepped through your doors. 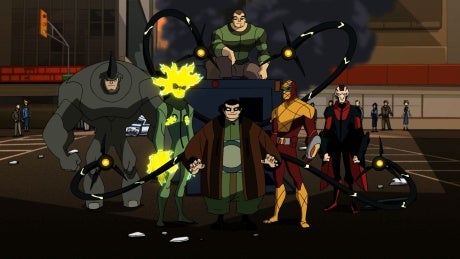 I guess it could have just been the style of the cartoon because these look perfectly fine… well for a comic book.

At this point, not really sure what doing with this article, but eh mindless rambling is what Bar Banter is all about.