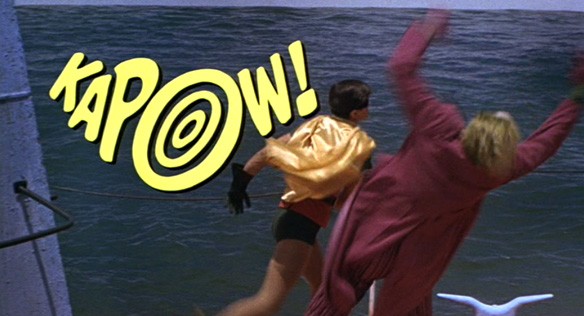 The fight scene has been a Hollywood staple since Leo the Lion was merely a cub. It offers a thrill, an excitement that captures every emotion in the heat of the moment. From love to hate, comedy to tragedy the art of the fight has evolved into a film’s perfect climax, whether that be mentally or physically.

Of course, they’ve moved on significantly since the words ‘kapow’ and ‘whammy’ blasted onto the screen as Batman struck a blow to the Riddler’s right cheek, with today seeing some of the most incredibly choreographed scenes hitting our big screens.
But which scenes really get us going? What films really have us on the edge of our seat? We look at three of the best fight scenes to come out of Tinsel Town. 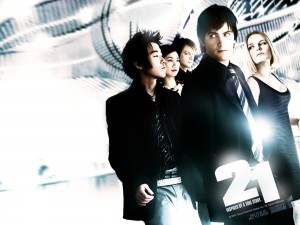 Hardly a classic when it comes to the world of film, the Robert Luketic film went against his then-recent chick flicks which included Legally Blonde, The Ugly Truth, and Win A Date With Tad Hamilton!, and into the realms of Sin City.

But what it does have is a pretty kick-ass fight scene in what is a sexy, stylish, and sophisticated picture based on the MIT Blackjack Team’s escapades as documented in the 2003 book Bringing Down the House.

Starring Kevin Spacey and Jim Sturgess, the pair form a tight bond, with Sturgess playing Ben, a young math genius being taken under Professor Micky Rosa’s wing and into the world of card counting.

From there it all goes wrong, with the fights playing on the blackjack table being as brutal as the one following Ben’s rise to a high roller. Going head to head with Spacey (and in fact the casino) sees Ben get hit around in dramatic fashion in the under-layers of the casino by security chief Cole Williams (Laurence Fishburne).

The fight is a significant plot turn in the movie, bringing the ‘big player’ back down to earth. But enemies have been made. Rosa is against him, as is his team, and the casinos all have his cards marked. And then there’s the twist…

Daniel Craig’s arrival as James Bond in Casino Royale may be better remembered for his march out of the ocean in some incredibly tight trunks, but what cannot be forgotten is the brutal, bloody fight on the stairwell which saw Bond step away from the cocktail sipping gentleman of Pierce Brosnan’s days into a hard, lethal, killing machine.
Craig brought some much needed heart and a little more realism to the role, and the film dragged the franchise kicking and screaming (and shooting and strangling) into the 21st Century.

It was also a noticeably more violent and darker instalment than what some Bond fans might have been used to, but it set the tone for what we would grow to love over the last three 007 movies.

The fight is on when the enemy attacks Bond and his current beau Vesper Lynd, played by the beautiful Eva Green, in a stairwell at the casino. After swiftly taking care of the first foolish offender who attempts to bum rush 007 and winds up dropping head first down the stairway, he then has to fend off maniacal machete wielding bad guy Obanno. There are plenty of whacks, smacks and cracks (without the 60s style font to tell us) as they continue to clash, going down flight after flight of stairs.

Vesper is of little use, simply doing her best to avoid getting hit or dodging at the odd rogue machete flying at her. Bond eventually finds himself on top in the tightly fought bout and gets a strangle hold on the fight, quite literally. And what’s more is that our hero does it all in a tuxedo, and of course is neither shaken nor stirred.

Although for Bond the fight has only just begun, and his battle on the poker table is one of the most enthralling casino scenes of all time. While going toe to toe with Le Chiffre, he uses MI5’s cash to build up a prize pot which could have him killed by both the international terrorist and M alike. It’s not the first time Bond has been in trouble at the tables – we’re starting to think he’d be better off trying the online casino to stay out of shooting range – with him risking his life, and money, in Thunderball, On Her Majesty’s Secret Service, and GoldenEye. We’ve two words for you 007, online poker!

Of course, he’ll inevitably dispatch of any bad guy anyway with style, sophistication, and an incredibly bad pun to finish. In the words of Connery, “shocking.” 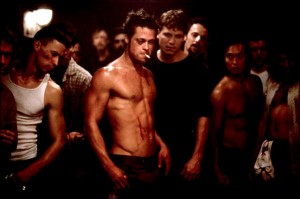 Of course we’re already breaking the first rule of Fight Club by talking about it, but how could we compile a list of movie fight scenes without including David Fincher’s cult classic?

It’s a film everyone should watch, with Ed Norton starring as a pen-pushing office drone whose life is completely transformed when he meets hard-edged eccentric soap salesman Tyler Durden. Becoming involved in a new form of underground fight club where men of all backgrounds face off in brutal contests, it marks one of the most thrilling, and stylish films of all time. The fight scenes are well executed and notably rawer in comparison to typical Hollywood-styled fight scenes. But it’s a style that perfectly suits the material and mood of the film which is a gritty, thrilling experience from the start to its shocking end.

There are numerous violent scenes and match-ups featured in Fight Club, including a particularly violent fight between Ed Norton’s character and Academy Award winner Jared Leto, who plays the part of Angel Face. The two topless competitors battle it out, throwing fierce punches until Ed gets the upper hand and continues to pummel Angel’s face as he lay on the floor. A fight which results in the loser being dragged from the basement and taken to hospital all battered and bloody, it leaves Norton claiming that he “…felt like destroying something beautiful.”

I am jack’s complete lack of surprise from Gabriel Fasano on Vimeo.

In addition to the raw beatings, there is also a memorable fight scene involving just Ed Norton himself. The actor single-handedly, quite literally, beats himself to a pulp in front of his boss as part of a blackmail scheme. As he sits in his superior’s office, he kicks off by punching himself in his face, knocking him back off of his seat. He follows up with another smashing thump, slamming him on to a glass table (which he shatters) before security arrives and assumes it was the boss doing the beating.
The Raid 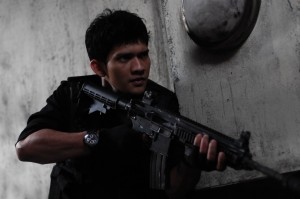 If you’re one of these fight fans that literally puts on a DVD and skips right on through to the juicy parts, then perhaps 2011’s Indonesian action crime thriller The Raid will be next on your watch list. The movie, from Welsh filmmaker Gareth Evans, is an all-out, high-octane, exhilarating thrill ride. It barely lets up for its full 100 minutes and is packed with some incredible fight scenes.

The Toronto Film Festival winning picture follows a team of Indonesian SWAT members as they raid an apartment block in Jakarta known to house a number of criminals and a dangerous crime lord. From here on in, it’s a shooting, fighting, and martial arts spectacle as the team makes their way through the building, competently led by the fight savvy Officer Rama (played by actor, stuntman, fight choreographer, and martial artist Iko Uwais).

There really is nowhere to begin attempting to isolate one particular fight scene in the movie as the routs come thick and fast. But one particular highlight just happens to be the climatic threesome bout involving Rama, his criminal brother (who was holding up in the building at the time), and a terrifying and vicious little henchman known as Mad Dog. Rama goes to rescue his brother who has been tied up and is in the process of being beaten by the sadistic Mad Dog. But as soon as his savior bro shows up, Mad Dog decides to cut down his restraints for his chance to take on both in an epic clash.

The fight itself, which lasts for over 5 minutes, is choreographed beautifully in traditional martial arts style. The camera swiftly adjusts itself around the action getting in amongst the fierce skirmish. Even up against two talented fighters, the skinny Mad Dog manages to use his inhuman tenacity to scrap his way through. Although, as the odds were always up against him, he eventually gets beaten and overpowered by the two brothers and receives an unfriendly throat slice from a fluorescent light tube straight across his neck.