Amnesia: A Machine for Pigs Review

Amnesia: The Dark Descent was probably the scariest game I’ve ever played. It was so scary that I had to take breaks because sometimes the feeling of dread was just too strong. Now Amnesia: A Machine for Pigs comes out and the question is: Can it live up to it’s predecessor? 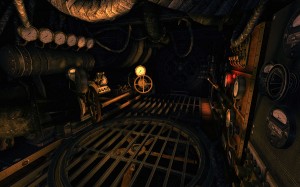 I was instantly intrigued by the announcement of a sequel to The Dark Descent, the game wouldn’t be done by the original developers, Frictional Games, instead development duty would fall to The Chinese Room. The company responsible for Dear Esther, an interesting experiment in interactive story-telling that pushed the Source engine to its fullest, to provide beautiful environments. Both qualities that I felt would help out greatly in an Amnesia sequel. They had my attention.

The game’s only direct connection to the original though is that it is set in the same world. And once more, we play the role of a protagonist who has lost his memory, but is still determined to achieve his goal. In this game however, the hero is trying to locate his children, which seems to be the only thing he sort of remembers. For fear of ruining the experience for others though, I won’t talk much more about the story. I find it to be the biggest draw of the game. 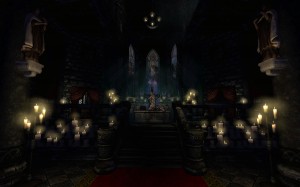 This time the game is set in 1899 and you will quickly notice that there are actually electrical lights, gramophones and actual audio records of yourself. Also, we are no longer solely in gothic environments of the original. Soon after the start of the game, we go down into a mechanized environment, where everything is built of pipes and run by steam. Even in this unusual scenario, The Chinese Room is able to build up a great atmosphere, especially through the use of sound. Everything in this mechanized environment just makes creepy noises, the pipes begin to look like veins and soon you think you are wandering through a living organism.

The gameplay didn’t really change for the sequel. You are still trying to find you way through these harrowing spaces by solving relatively simple puzzles. Most of the time they are about finding the right item to use in a machine to open up a way for you to continue on. You are also trying to find clues about what is going on and this game again provides lots of notes and audio recordings to deepen it’s tale. 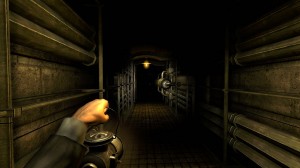 So far all of this sounds great right? The problem is that very early on you notice that the game begins to undermine itself, mostly through the lantern you get in this game. This time around you use an electric lantern, so you can use it as much as you like. Because of this the dark and creepy environment lose a lot of its fear factor. Not only did they get rid of the precious resource oil, but also with the sanity one. Not only did they get rid of using oil as a precious resource, but also your mental one. In the original game, your sanity was a resource that could be exploited by the game. Looking at an enemy or staying in the dark too long would drain your sanity, this is no longer the case in the sequel. The use of tinder is gone as well, instead you sometimes just find lamps you can turn on by flicking a switch. basically they got rid off any kind of resource management and therefore make the environment and even the enemies less of a threat.

Speaking of enemies, like I mentioned it is now no problem to just look at them and this turned out to be an issue as well. I don’t think these enemy designs are especially creepy and the more you see them the less you fear them. This is one of the basic principles of horror: You fear most what you don’t know or can’t see. In this game they go so far as to present you these monsters you are supposed to fear in full light and in an entirely safe place. On top of that I can only remember 5 instances in the 4 hour campaign in which enemies were actually out to get me.

Score 4 (out of 7): So it might sound like I hated the game, but that is not the case. I just think they made some stupid mistakes, which make this game way less effective at making you afraid. It still is an interesting and creepy story that might deserve to be experienced and this sense it is very similar to Dear Esther. It just doesn’t come close to the greatness that was the first Amnesia.