An On The Floor Reaction to All In

All In is an independent wrestling promotion, held on September 1st, 2018, at the Sears Centre Arena. It is the largest independent wrestling event in roughly 25 years. I was one of the 10,000 plus in attendance that warm Chicago evening and below is a rough account of my All In experience. 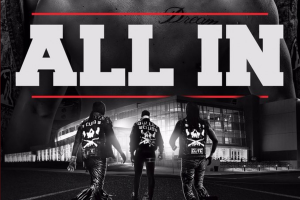 I left Friday morning. It was a quite a drive to Chicago, about 330 miles one way. For you travel the world types, surely this is no Lewis and Clark Expedition. But for the traveling weary such as myself, this drive was an ambitious undertaking. But take heart weary reader, I made it All In one piece. See what I did there?

Securing the tickets upon release, before selling out in under an hour, I managed to obtain a coveted floor seat. Honestly, this was the only way I planned on attending the event. I realize that there are many who traveled an even greater distance than I, for seats that weren’t even relatively comparable. But for me, it was the only way it would be worth my effort. And there was an effort. 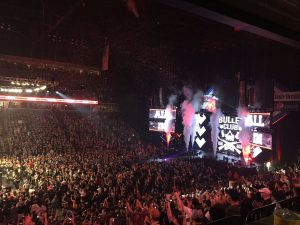 For about half of the drive, roughly three hours in, it was a relatively calm voyage. Especially considering that it was held Labor Day weekend. It was when I hit the Chicago traffic that I paid the piper. Progress came in 20 mph increments, carefully scaled between complete stops on the toll road expressway. I’m not the denizen of a major metropolitan area, so I realize that this is probably everyday traffic for millions of people around the country, but I was more than fatigued by the time I arrived at my booked hotel reservation in Hoffman Estates.

In the meantime, I looked up ‘Chicago deep dish pizza’ and located a restaurant nearby. I placed an over the phone order at Georgio’s for carry-out, and 30-45 minutes later my tastebuds were treated with the deep-dish wonder. In all, I can remember life before my first Chicago deep dish. But this was obviously a grade above your normal pizza eating experience.

I got to the show about an hour and a half early and hurried to get in line. The difference of 10 minutes here could mean an hour later. The doors opened like clockwork and 3:00 central time and we favored few to enter early scattered like cockroaches. I opted to go to the restroom first, then made my to the concessions stand. I picked up the All In promotion poster and two t-shirts. From there, I was off to my seat. Section F, Row 4, Seat 7. I made it.

10,000 is a large number. It’s even bigger when you’re one in a proverbial ocean of people. And they were everything you would hope for a live crowd to be. They were loud and excited for every aspect of the night. Every performer was over with them and there was a genuine sense of anticipation in the air. There was a chant for just about everything and with every pinfall that reached the count of 2, the crowd would echo the count and give a screeching, “Sweet!” Just like Cody and the Young Bucks, the crowd was All In. 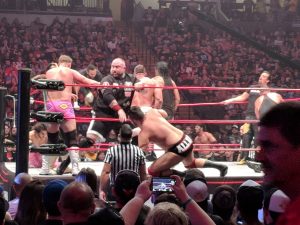 Over BudgetThe Zero Hour show was more than entertaining. The Over Budget Battle Royale set the tone for the rest of the evening. It was fast paced, action packed, and complete fan service for the those in attendance. As the main card got underway, it seemed obvious by the crowd reaction that the first few matches of the night were to help fill out the event. Of course, they were still great matches. The fatal four-way women’s match was especially to my liking. I didn’t expect much from the match and was subtly blown away by it.

The Stephen Amell V. Christopher Daniels match was the real surprise performance of the night, given how little everyone seemed to expect of Amell’s ring work. Cody had a rather emotional match capturing the NWA Championship from Nick Aldis. That match marked the exact moment the roof blew off of the Sears Centre. Everything from that point on was a symphonic arrangement reaching its crescendo. 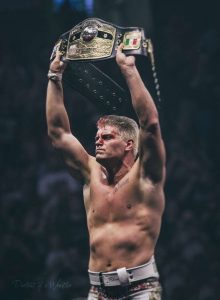 Joey Janela V. Adam Page was an insane bout that was more akin to ECW than Tommy Dreamer’s hardcore antics earlier in the night. Flip Gordon V. Jay Lethal was way more fun than anything I was expecting. While Marty Scurll V. Kazuchika Okada was an excellent, light-hearted, story-driven match.

Kenny Omega V. Pentagon Jr. was my personal favorite of the night. Omega is the greatest wrestler alive and it was an honor to watch him perform. Throw in a shock appearance by Chris Jericho and you have the moment of the night.

The night was capped off with an exceptionally fast-paced six-man tag match of The Young Bucks and Kota Ibushi V. Rey Mysterio, Fenix, and Bandido. As the match ended, the Young Bucks were joined by Cody, Adam Page, Kenny Omega, and family. The first-time promoters gave a personal thank you to those in attendance and shared what we can expect next from the Elite, “We’re sticking together.” Kenny Omega appropriately closed the night, wishing us goodbye and goodnight. Bang!

All In May Have Changed Pro Wrestling

After the show ended, I made my way to the outside parking and drove for 330 miles back home. The weather forecast didn’t play a factor until I was nearly home in Michigan. As I journeyed for those 5 hours, I couldn’t help but be struck by what this moment would mean for professional wrestling.

The entire show was built off the back of their YouTube channel, Being The Elite. From Jay Lethal channeling the spirit of Macho Madness to Joey Ryan seemingly returning from the dead to finish his feud with Adam Page. The whole show was a pay-per-view finish to a YouTube show. And the amazing part is that it was a better, more consistent story than most of what the WWE offers. 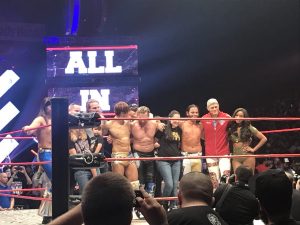 This is what professional wrestling can be. This is the roadmap. And the Elite proved that they really can change the world — even if it’s just the world of pro wrestling.