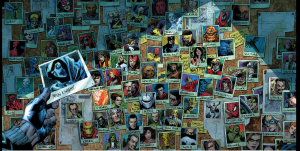 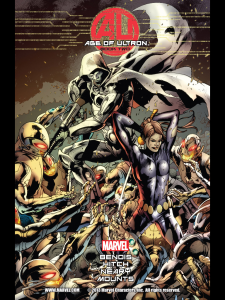 Here we are in the second issue of Age of Ultron. Now remember we had the exciting movie type action in issue one with the rescue of Spider-Man. Also the issue ended with what appeared to be a “defeated” Captain America.

Now Age of Ultron 2 is vastly different from the first issue. We open up in San Fran and it looks a lot like the New York that we say last week. There was a lot of visuals and not a lot of dialogue, which can work on an emotional level, but right now it was to soon for that. We are not really “invested” in these characters because we don’t really know what they have gone though and how they got to this point. If we had more background and understood why Captain America feels defeated then the lack of text could have a better effect on our emotions. The artwork is great again but it would have been better to advance the plot and at least given the reader some background on what happened and how our heroes got to this point.

Instead the few dialogue we get is Spider-Man telling everyone that the people who captured him wanted to sell him to the Ultrons, something the reader was already aware of. I know that he had to tell everyone but that is what makes up majority of the story in New York. We finish with another shot of Captain America, still looking pretty roughed up but now he has a plan!

I dont want to say this issue was “bad” but i felt that the plot needed to be moved more then it was. Like I said I love the art and the few frames in Nick Fury’s secret hideout were cool. Saying Nick would never leave a paper trail and that is why the Ultrons would never find the hideout is something that we would expect from his character so that was a nice touch. Also I loved the picture wall in the hide out, you can see it above I could stare at that for a long time. I also liked when we were back in New York and seeing all of the heroes gathered around Peter.

Overall, I Recommend Age of Ultron 2 – Basically it leaves you underwhelmed. I feel there could have been more plot development and something that would really make this issue stand out. If you have a friend that has already bought the issue I would suggest borrowing it to read so you know what is going on. It isn’t the worst comic ever but it is also not the best. I hope issue 3 gets back on track.

Agree or disagree with me?

Let me know if the comments below or on twitter (@joshraj9)