The A-Z of Geek Cinema: Z is for Zodiac 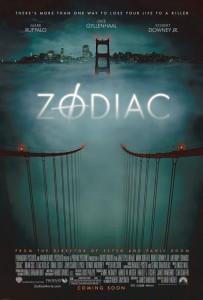 Zodiac is an interesting thing, on multiple levels. David Fincher’s 2007 film about the Zodiac killer who terrorized California in the late 60s and early 70s is a crossroads of sorts. For Fincher, and thematically in the film itself, it portrays a transition from one form to another. Though, I’ll be honest: Fincher’s shows a lot more smoothness than the one that happened in reality.

Fincher has long been known as an exacting director, one who utilizes large number of takes, over and over, until he gets exactly the shot he wants. But this focus on details goes beyond the shooting, and into the frame, and the research for the film. He and the screenwriter, James Vanderbilt, went to extreme lengths to research the film, turning up evidence and interviewing all parties involved (those still alive) to try to make it as authentic as possible. To this end, CG was used to remake San Francisco to how it looked at the time, and the years going forward.

Which is an aspect I felt the movie handled incredibly well, actually: the passing of time. It forgoes the normal timestamps for most of its run time, establishing a time period at the beginning, then just using the on-screen “12 hours later”, “6 hours later”, “3 months later”, “a year and half later”, each seeming to come longer and longer after the previous one, until at a certain point, when you feel like the drama is starting to ramp up, BAM: “4 years later.” In the version I watched (the directors cut), this is preceded by a short sound collage over black of news headlines and popular music, to denote how much time is passing. But it’s that chiron, that title font, that hit you: it’s been four years, and nothing has happened. The transition from terror to complacency in the world of the film (and, holy crap, it was our world) can be as quick as a film edit.

And transitions are what the film is about. The main one being the transition from analog to digital. The various local police departments where the various killings took place all have evidence, and all have leads, but none of them really start talking to each other until it’s too late. And even when they do, they’re stymied by the lack of communications technology at their disposal. Det. Toschi (Mark Ruffalo) asks another officer to fax him some paperwork, and the latter scoffs at him, “We don’t have a ‘fax’.” Meanwhile, the killer is using their technology against them, sending messages to the papers, calling television programs, using the news reports to take credit for killings he had nothing to do with and throwing the investigation into more disarray. The chasers haven’t caught up to the technology of the crooks yet, and while the gap eventually shrinks, it was not in time to catch the (still unknown) killer at his work.

This ambiguity was revelatory as well, to me anyway. Rather than putting a pin on their theories, and definitively saying “It was Arthur Leigh Allen,” they leave it as open as it is in reality; while a lot of evidence points to Allen, key things such as handwriting analysis and other concrete evidence exonerates him. While some people could feel that the final scene of the film, where one of the survivors of Zodiac’s attacks identifies Allen as the man who attacked him with “8 out 10” certainty, it still comes across as non-definitive. Using different people to play Zodiac in the various attack scenes confuses this in the audiences mind as well, even if they’re not aware of it. Fincher and Vanderbilt (and Robert Graysmith, who’s books they used as basis) might believe Allen was the guy, but they’re not 100%, and they don’t want you to be either.

This film, from the script to the casting to the direction, is a stone-cold classic. Everyone involved knocks it out of the park, and it baffles me that it’s not talked about more in cinema circles. It’s a transition for Fincher as well, from his earlier thriller and more action-heavy work to his recent more quiet and meditative films (as “quiet” as you can call things like The Social Network and The Girl With The Dragon Tattoo.) One of my favorite directors working today, Zodiac is easily one of Fincher’s best.

So it’s come to this. The end of the line. I’ve gone through the alphabet, twice, and I’ve talked about every important movie. And also Yentl. Okay, not every important movie. Hell, you would have a hard time making a case for most of the ones I’ve talked about in this column as “important.”Â  But I think, over the past year and a half, I’ve written some pretty good things about some pretty good movies. And also Yentl. And I hope you’ve all enjoyed it too.

As for the future… maybe next week, maybe the week after, comes THE NEW TESTAMENT. You’ll find out what that means. Revelation, the apocalypse, angels, the End of the World. It’s all there. Plus explosions and lasers and robots. So… there’s your hints. You Are (Not) Alone.