The A-Z of Geek Cinema: Z is for Zardoz 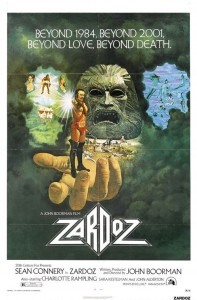 How does one even put Zardoz into words? I mean this quite seriously. The “arc words” of the film (to borrow a phrase from TV Tropes) is “The gun is good, the penis is evil.” I don’t even know how to process that on a fundamental level. It is such a drastically WEIRD film, one that, while I feel you could unpack all sorts of layers of Freudian madness and symbolism from, it’s not at all worth the time, effort, and life force you would expend doing so. It is a recursive descent into insanity and Sean Connery’s mustache. And I’ll be honest: I kind of love it.

Now, I’ve already spoken about John Boorman in this column, and on how he might possibly have issues with women. His film Excalibur betrays a certain… well, not misogyny exactly. It’s something weird and more bizarre. I don’t have the clinical psyche vocabulary to name it precisely. But Zardoz, released 7 years before Excalibur bears out this idea as well. But it adds a healthy dose of sexual repression and fear of death to the mix as well.

I’m not going to recount the plot, or dissect every little thing in the film. No, that’d take hours and multiple articles, and while I’m sure the internet is full of trivial discussions of all sorts of things, I don’t think it’s quite ready for a hard hitting analysis of the semiotics of Zardoz. And really, what can be said about it? I’ve been struggling with this since I started this column. The entire time, from jump street, I was going to do this one for Z, and now that I’m here, I’m finding myself at a loss for words. We’re talking about a movie where a giant stone head flies around through the air of a dystopian future, declaring in a booming voice, “The gun is good. The penis is evil. The penis shoots seeds, and makes new life to poison the Earth with a plague of men, as once it was, but the gun shoots death, and purifies the Earth of the filth of brutals. Go forthÂ … and kill!” It then goes forth shooting assault rifles out of its mouth like a waterfall. How does one process that? And we haven’t even gotten to the part where Sean Connery is wearing a red diaper. 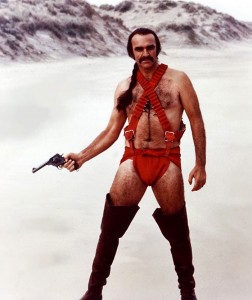 Yes, that is correct: Sean Connery spends 90% of the film wearing nothing but a red diaper and a mustache. He apparently took the role in order to separate himself from the perception of being James Bond and only James Bond. And brother, this movie does him a world of good in that regard. He spends most of the runtime being either violent, angry, sexually assaulting, or murderous. And then he’s wearing a wedding dress…

Real talk: John Boorman wanted to make a live action Lord of the Rings adaptation. That fell through, thankfully. I don’t think the world was ready (nor will ever be) for that. Instead, Boorman wrote this, which was partially inspired by Tolkien, and also Huxley, Kubrick & Clarke’s 2001, and 1984. But something got lost in the translation, and Boorman’s sexual hangups and weird energy permeate the entire film, and it becomes something else. Something darker. Yet still so, so boring.

Yes, that is the final word on this film. For all it’s weirdness and insanity and 70s nudity, it is actually pretty boring. Things just happen, with no rhyme or reason or any connection to what happened before. That the same director who did Deliverance made this film, and that it was released to a wide audience, astounds me. It is, quite literally, insane.

So there it is, the A-Z. Or anÂ A-Z, anyway. If you haven’t, go ahead and read all the other entries. I’m quite proud of some of them, and all are pretty fun. I think so, at least. Now, as to the future: I’m not doing a column next week (though a game review might show up), and I will start back up again the following week. What format that might take, I haven’t decided yet. Might go back through the alphabet again. Might just skip around, as is my wont. We shall see. Until then, excelsior, and thank you all for reading!