The A-Z of Geek Cinema: Y is for Yellow Submarine 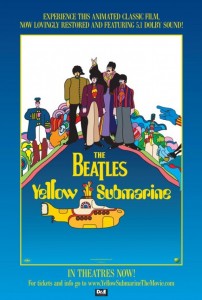 POP QUIZ: what Beatles movie doesn’t even feature the Beatles for more than a handful of minutes? ANSWER: Yellow Submarine, the 1968 animated musical fantasmagoria based on the Lennon/McCartney song of the same name. And it’s true: the Beatles themselves had very little to do with the film at all, outside of allowing their music to be used, and appearing in a short live-action coda. So where exactly does it fit in the Beatles cinematic canon? And furthermore, why should you care? GOOD QUESTIONS

The Beatles had an interesting time in the movie houses. Richard Lester’s two films, A Hard Day’s Night and Help!, are considered all-time classics and standard bearers for mid-60s youth culture. And rightly so; they’re both incredibly fun and timely snapshots of the consciousness of the youth at the time, wrapped around the music of the decade from the Greatest Band EverÂ®. What’s more interesting is where the Beatles went from there. You can see the seeds of their more psychedelic and weird leanings in Help!, and their musical transition had already begun at the time.

These emerged in a huge way in their next picture, the barely directed and pretty much not written Magical Mystery Tour, which didn’t even get a theatrical release, instead consigned to a Christmas Day airing on the BBC. Poorly received and largely ignored at the time, it’s easy to see now that the band was straining at the edges of their popular conception. It is by no means a good film. It is, quite frankly, a mess. The music is still great, but it was such a vanity project for Paul McCartney and you can tell the other 3 aren’t quite as invested. Add to that a troupe of non-actors and an entirely improvised script, and well… this is what you get.

Which leads us to Yellow Submarine. The band was disillusioned with the film system already after Help!, and the experience of Magical Mystery Tour obviously didn’t help at all. They owed another film to the studio though. The idea was brought to them of doing an animated film, with their music and likenesses, which they would have to do little to no work for. This obviously seemed like a solution to all their issues with doing films. (Unfortunately, due to the very nature of their roles in the film, the studio still said they owed another film, which eventually ended up being Let It Be.) 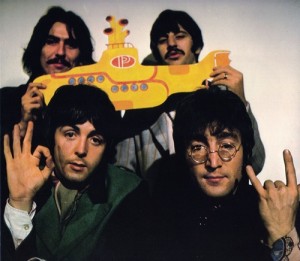 So yeah, the existence of the movie itself is a weird animal to begin with, and then you add the actual plot and animation of the film to it, and it goes to another level. And this movie is WEIRD. The plot, such as it is, is very languid and fuzzy, with many of the scenes designed as set pieces to complement the songs used and only cursorily connected to the overarching story. The animation itself is considered groundbreaking, and played a large part in the mainstream acceptance of animation as an art form beyond just children’s programming. Utilizing a pop art style, heavy on symbolism and psychedelic imagery, with the Beatles themselves staying in the likeness of their Sgt Pepper’s Lonely Hearts Club Band period, the animation swims and flows, switching media forms and forming words and creatures out of the landscape at random. I can only imagine how people who loved A Hard Day’s Night‘s antics took it on first viewing.

The Beatles (who are, it should be noted one of my favorite bands) had a decade of excellence. They did more in their short 10 years than many bands do in their entire lives. And that includes multiple films, which is not something many acts can say. So let’s praise the Beatles, which I’m sure hasn’t been done enough. After all, all you need is love.